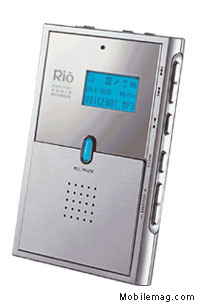 The Rio DR30 functions as a digital audio player and recorder. Size was a major concern when including a speaker on the device. It is the world most thin MP3 device at only 9.5mm. Weight is a mere 38.4g. Playback for the 256MB version is approximately 72 hours. The voice recorder function can record from the built in FM tuner straight to MP3 at 32kbps long time voice recording. In Stereophonic mode you can record at 96,128, or 160 kbps! VOR allows you to record only when there is sound, it will shut off automatically when it is silent.

In order to keep the device simple and easy to use, you can record ” scoop button functions ” and so on with the load one-touch system that customizes the display to your own taste. The Liquid crystal display corresponds to plural languages such as Japanese and English, and ID3 tag support for each file.