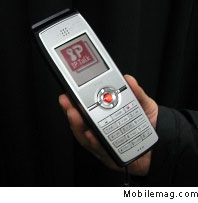 Mitsubishi Electric Corp of Japan made public its current development state of a new mobile IP phone handset called “Mobile IP Talk” at a private event on Feb. 13, 2003 to showcase the fruits of its R&D development.

The handset, for providing mobile voice-over IP telephony, has a slot for a Compact Flash card in which a wireless LAN or PHS card can be set. It first announced its development of the handset in September 2002. Since then, it has been striving for further miniaturization of its case and reduction of power consumption. In the summer of 2003, according to its roadmap, it will roll out the handsets with a standby time of up to 30 hours or so, that is, almost 20 times longer than previously announced.

In order to extend the standby time, Mitsubishi Electric is now focusing on three improvements. First, it is going to increase the current capacity of the Li-ion secondary battery of the handset. The battery now delivers 100mAh, but the target is set at a capacity up dozens of percent. However, its total weight will be kept the same through weight saving, specifically by making the case almost two-thirds smaller.

Second, it is going to change the current slot, built purposely for a Compact Flash card, to a SD card specific slot. Currently, a US maker is developing a wireless card of the SD card type, which is to be adopted for the handset. This wireless card consumes less power in comparison with presently available ones. A spokesperson of Mitsubishi Electric commented: “PHS cards of a size of the SD card are now available, so that all we have to do is use it.”

In addition, it is going to modify software for controlling a standby mode of wireless LAN for reducing power consumption during the standby time. According to the company, “Circuits are activated only once in several seconds in order to detect available radio wave. Except this activation, the power supply is halted for most wireless circuits.”

With these newly devised techniques, it assures a standby time roughly 20 times as long as a conventional model can.

The handset provides the IP-phone function based on the SIP protocol and its unique “HTTP based Conference Application Protocol (HCAP).” Its basic configuration includes uITRON as the operating system and the M32R developed by Mitsubishi Electric as the microcontroller.