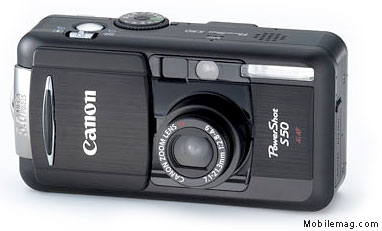 Canon U.S.A., Inc., a subsidiary of Canon Inc. (NYSE: CAJ), is mounting one of the most aggressive new product introductions in its 68-year history with the introduction of five new PowerShot digital cameras. Each new camera, from the entry-level A300 3-megapixel model, to the fully-featured S50 5-megapixel model, incorporates advanced features and exclusive technologies. Currently consisting of ten models, Canon’s line of PowerShot digital cameras offers one of the widest selections of any brand in the industry. And while each model is distinctly unique in features and pricepoint, every PowerShot camera incorporates Canon’s exclusive DIGIC Image Processor for maximum camera performance, the highest quality Canon glass optics for incredibly sharp photographs, and Canon’s new iSAPS technology which enables the camera to achieve precise exposure and true color rendition. In addition, every PowerShot camera will directly connect to several Canon Bubble Jet Direct and Card Photo printers for fast and easy creation of high-quality prints in the home or office.

“The introduction of five new PowerShot digital cameras is one of the most aggressive product announcements Canon has made in recent memory, and a clear indication of our desire to become the preferred brand of digital cameras among consumers,” said Yukiaki Hashimoto, senior vice president and general manager, Consumer Imaging Group, Canon U.S.A. “With ten camera models now available in our PowerShot line, along with unique and exclusive technologies such as DIGIC and iSAPS incorporated into each model, Canon is uniquely positioned to provide consumers at all levels of expertise and financial means the ability to produce excellent photographs quickly, easily and with confidence,” Mr. Hashimoto added.

Canon Optics
Canon’s heritage as an imaging company dates back almost 70 years to the company’s founding in 1934. Since then, Canon has worked hard to perfect the process of creating extremely high-quality optics for its line of imaging products and is now the world’s largest manufacturer of cameras and lenses. Canon is a global leader in optical design, with many advanced and original technologies such as aspherical and fluorite optics, optical image stabilizers, ultrasonic motors, and more. These combined technologies allow Canon users to achieve the sharpest images possible.

Canon’s DIGIC Image Processor
Canon’s proprietary image processor, called DIGIC, was developed specifically for use with its line of digital cameras and combines the jobs of image processing and camera function control into one chip. Canon’s DIGIC (short for Digital Imaging Integrated Circuit) is much faster at image processing than a general purpose CPU because it employs parallel processing rather than the sequential, one pixel at a time processing methods used by conventional digital cameras. The extra speed of DIGIC makes it possible to incorporate higher quality signal processing algorithms than conventional digital cameras, while at the same time improving buffer performance and consuming less battery power because signal processing is completed more quickly on a per-image basis.

However, DIGIC does much more than image processing. Because it was specifically designed for use in a digital camera, it is also capable of handling nearly every digital camera function including JPEG compression/expansion; memory card control; LCD/Video control and processing; gain control (control of CCD signal amplification); Auto Exposure; Auto Focus; Auto White Balance control and most other functions of the camera. The result is a camera that offers faster and more powerful AF than ever before, faster image processing, longer battery life, and the ability to record 3-minute movie clips with sound.

iSAPS Technology
Over the past 68 years, Canon has accumulated a vast amount of photographic data and know-how and used it to create some of the most innovative camera products in the marketplace. Now, using that same data and know-how, Canon has developed an exclusive technology called iSAPS (Intelligent Scene Analysis based on Photographic Space) that can predict certain camera settings such as focusing distance, exposure and optimum white balance based on zoom focal length, overall light level and tonal distribution data. Canon refers to this collective data as “Photographic Space.” By incorporating iSAPS technology into its PowerShot line, the cameras can analyze a scene just before the image is made and in doing so, increase the speed and precision of the camera’s autofocus, auto exposure and auto white balance.

PowerShot S400 Digital Elph
The PowerShot S400 Digital Elph is the world’s smallest 4 megapixel digital camera with a 3x optical zoom (3.6x digital / 11x combined) lens and a 9-point AiAF autofocus system that makes focusing quick and easy, even with off-center subjects. The camera also offers a stainless steel body with a new super hard Cerabrite finish to guard against scratching; an improved Movie Mode that captures clips up to 3 minutes apiece with sound; and Direct Print capabilities with Canon’s Card Printer CP-100 dye-sublimation printer and several Canon Bubble Jet Direct printers. The PowerShot S400 will be available in March and have a suggested retail price of $599.

PowerShot A60 / A70
The PowerShot A60 (2.0 MP) and A70 (3.2 MP) cameras are ultra-compact AA-battery powered models that provide numerous high-end features including an aluminum alloy exterior; 3x optical zoom lens, 5-point AiAF autofocus system, enhanced Movie Mode with Sound for clips up to 3-minutes, close focus to 2-inches and a full range of exposure modes including Program, Shutter Priority, Aperture Priority and Manual. Each model is compatible with the optional WP-DC700 Waterproof Housing good to depths of 130 feet, as well as supplementary wide-angle, telephoto and macro converters for added flexibility. The PowerShots A60 and A70 are scheduled to be available in March at suggested retail prices of $349 and $449, respectively.

PowerShot A300
The PowerShot A300 is an entry-level, 3.2 MP model that includes ample features and camera functions. The AA-battery powered camera is equipped with a 33mm fixed focal length all-glass autofocus lens and a 5.1x digital zoom. It also offers 5-point AiAF and an enhanced Movie Mode feature allowing for up to 3-minutes of video with sound. Like all other PowerShots introduced at this time, it completely supports driverless downloads via PTP with Windows XP and Mac OS X, as well as EXIF 2.2, and DPOF 1.1. The PowerShot A300 will be available in April at a suggested retail price of $299.