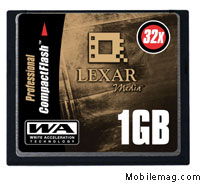 Lexar Media, Inc. (Nasdaq:LEXR), a leading designer, developer and marketer of award-winning high-performance digital media and accessories, announces it will boost the speed of its Professional Series CompactFlash cards to 40X, further solidifying the company’s leadership position in high-speed digital media. The new 40X cards will be available in 256MB and 512MB capacities and will feature the company’s Write Acceleration technology (WA), which further increases write speed in WA-enabled digital cameras. Completing its Professional Series line upgrade, Lexar Media will increase the speed of its 1GB Type I CompactFlash card to 32X.

Lexar Media, known for its rigorous speed-rating standard, has nearly doubled the speed capability of its Professional Series product line, previously rated at 24X for 256MB and 512MB cards, and 16X for the 1GB card. The X-speed rating is a standard pioneered by Lexar Media for solid-state memory cards where 1X equals 150KB per second write speed. Under this testing standard, the new 40X-speed cards are capable of 6MB per second minimum sustained write speed.

“Lexar Media has become known for its speed rating standard for CompactFlash and 40X, or 6MB per second write speed capability, is quite an achievement. What makes this even more significant, Lexar Media speed rating measures the minimum sustained write speed capability of the CompactFlash. Other companies’ speed claims are often burst or read speed and may not reflect the typical performance of the product,” said John Omvik, director, product marketing, Lexar Media.

Write Acceleration technology is the result of a Lexar Media proprietary high-speed flash memory controller and the cooperation of major digital camera manufacturers to increase write-speed performance by simplifying the way a camera and card communicate with each other. With WA, the camera can transfer more data, and command overhead is reduced. A significant performance advantage can be seen in high-resolution cameras that produce large image files and the increase in write-speed becomes even more noticeable when several images are shot in burst or continuous mode. Actual performance data will vary between cameras, resolution and shooting mode.

All Lexar Media Professional Series cards include a free copy of Lexar Media Image Rescue. Image Rescue is a unique and revolutionary file recovery software that recovers ‘perceived to be lost’ image files from Lexar Media-brand USB-enabled CompactFlash memory cards. The most common causes of image loss include removing the card from a camera or reader before the image has been fully stored, accidentally deleting a picture, reformatting a card or low camera battery power. Image Rescue goes to the root-level of the data structure to identify and retrieve lost images, even if the computer does not see the card. In most instances Image Rescue can identify and retrieve JPEG, TIFF and many RAW file formats.