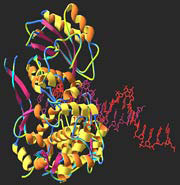 Israeli scientists have devised a computer that can perform 330 trillion operations per second, more than 100,000 times the speed of the fastest PC. The secret: It runs on DNA.
A year ago, researchers from the Weizmann Institute of Science in Rehovot, Israel, unveiled a programmable molecular computing machine composed of enzymes and DNA molecules instead of silicon microchips. Now the team has gone one step further. In the new device, the single DNA molecule that provides the computer with the input data also provides all the necessary fuel.

The design is considered a giant step in DNA computing. The Guinness World Records last week recognized the computer as “the smallest biological computing device” ever constructed. DNA computing is in its infancy, and its implications are only beginning to be explored. But it could transform the future of computers, especially in pharmaceutical and biomedical applications.

Biochemical “nanocomputers” already exist in nature; they are manifest in all living things. But they’re largely uncontrollable by humans. We cannot, for example, program a tree to calculate the digits of pi. The idea of using DNA to store and process information took off in 1994 when a California scientist first used DNA in a test tube to solve a simple mathematical problem.

Since then, several research groups have proposed designs for DNA computers, but those attempts have relied on an energetic molecule called ATP for fuel. “This re-designed device uses its DNA input as its source of fuel,” said Ehud Shapiro, who led the Israeli research team.

Think of DNA as software, and enzymes as hardware. Put them together in a test tube. The way in which these molecules undergo chemical reactions with each other allows simple operations to be performed as a byproduct of the reactions. The scientists tell the devices what to do by controlling the composition of the DNA software molecules. It’s a completely different approach to pushing electrons around a dry circuit in a conventional computer.

To the naked eye, the DNA computer looks like clear water solution in a test tube. There is no mechanical device. A trillion bio-molecular devices could fit into a single drop of water. Instead of showing up on a computer screen, results are analyzed using a technique that allows scientists to see the length of the DNA output molecule.

“Once the input, software, and hardware molecules are mixed in a solution it operates to completion without intervention,” said David Hawksett, the science judge at Guinness World Records. “If you want to present the output to the naked eye, human manipulation is needed.”