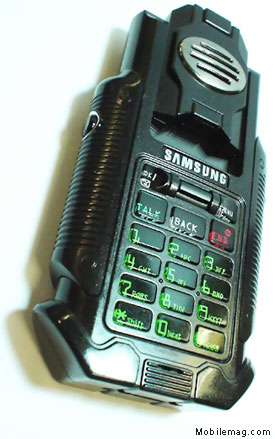 Samsung and Warner Bros. Pictures are to provide a cell phone that will be used in ‘The Matrix Reloaded,’ a sequel to the 1999 movie ‘The Matrix’.

We know very little about Samsung’s Matrix phone except for a teaser Web site that Samsung has put online to stir some interest. You can sign up online to be notified of the official release schedule for May, 15th 2003. The agreement with Warner Bros. has forced Samsung to not give out any more information on the phone until that date.

This deal could put Samsung closer to their goal of selling 20% more cellular headsets in 2003 then the previous year. That would be over 50 million handsets shipped, compared to 42 million in 2002.

Samsung is not the first handset maker to benefit from the Matrix. Nokia’s 8110 handset became a hot item for some time after it was featured in the last Matrix movie. It even sparked a small business in “Matrix-style sliding covers,” which thrid party companies began to manufacture after the public demand became so great.