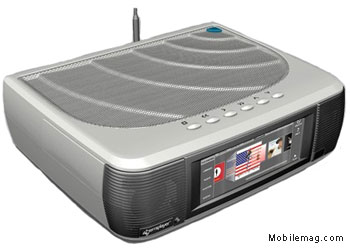 TerraDigital Systems LLC today will introduce its TerraPlayer wireless Digital Audio Jukebox product, as the company kicks off the on-stage demonstration phase at DEMO 2003. With a colorful interface that displays album cover artwork at the touch of a finger, and a sound system that delivers full, high-fidelity sound, TerraPlayer is positioned to transform the way consumers manage and listen to music.

Now in its 13th year, DEMO is considered the top venue for showcasing unreleased products and services that represent the best and brightest in emerging technologies. Only approximately 60 companies are selected to unveil their products at DEMO each year.

“The digital music industry is still very much at its beginning,” said Chris Shipley, executive producer of the DEMO conferences. “We’re only starting to understand how individuals will access and make the most of digital music, and the TerraPlayer represents a key development in networked entertainment. By offering a simple, easy-to-understand touchscreen that makes it easy and fun to manage and play great-sounding digital music around the home, this new product changes consumer expectations of what a digital jukebox can be.”

Unlike other consumer electronics interfaces that are simply text-based, TerraPlayer breaks new ground with its visual interface. TerraPlayer’s magic is its TerraTouch OS –a “drag and drop” graphical user interface (GUI) and LCD touchscreen that displays album cover art or any personalized icons, enabling consumers to select music with the touch of a finger.

A TerraPlayer system, with its custom design and software, consists of two components—the TerraPlayer Base and a TerraPlayer Radio. The Base acts as the wireless “radio tower” that grabs the digital content from the PC (via a USB connection) or a group of PCs on a LAN (via an Ethernet connection) and communicates with the Radio, which plays the music with sound that’s remarkably full and rich. The Base and Radio typically can be separated up to 500 feet, allowing most consumers to listen to music anywhere in or around their home. Users do not have to be “network literate” to install TerraPlayer–just plug it in, turn it on, and the room is filled with rich sound.

Company founder and president, Michael Seedman, will conduct the on-stage demonstration of TerraPlayer. “We are very proud to introduce TerraPlayer at DEMO 2003,” Seedman said. “We are convinced that TerraPlayer will re-introduce you to the music you love. Your favorite music is usually never where you want it — it’s in the car, in your gym bag, or in the stack next to your stereo or office computer. We’ve solved that problem because TerraPlayer makes it easy and rewarding to create a personal digital radio station that plays only the music you want to hear. Simply touch the screen to instantly find the album, artist, genre or any individual song you’re looking for,” he added.

“Entertainment will be a primary catalyst for moving home networking from a niche market to a mainstream market,” said Kurt Scherf, vice president of research for Parks Associates, a Dallas-based market research and consulting company that specializes in tracking emerging trends in the consumer electronics market. “We see strong growth for network-capable entertainment devices such as TerraPlayer,” he said.