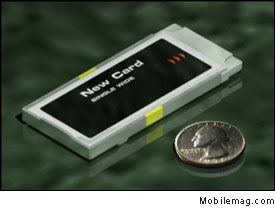 PCMCIA, a leading technology trade association, today announced the development of a new specification codenamed NEWCARD that takes the next step in PC Card evolution. The new specification builds on the successful characteristics of the PC Card: reliability, ease of use and wide industry support while delivering external expansion with reduced size, increased speed, lower costs and support of advanced serial I/O technologies, USB 2.0 and PCI Express.

“Innovative applications and technologies continue to be developed at an amazing rate, requiring PC clients to have the latest expansion capabilities,” said Brad Saunders of Intel Corporation and chairman of the PCMCIA. “By drawing upon USB 2.0 and PCI Express, the NEWCARD specification will bring serial bus technology to a smaller form factor that offers more performance and improved ease of use. This new specification will revolutionize how PC developers and OEMs utilize the expansion slot for next-generation features such as wireless networking, storage and card readers.

“This initiative also marks the first time that three major industry work groups–PCMCIA, USB-IF and PCI-SIG–have partnered to promote and validate a specification. We expect NEWCARD to have a widespread impact on the industry because it leverages existing technology to make PC expansion easier and less expensive,” added Saunders. In addition, the PC Quality/Ease of Use Roundtable, an industry group that focuses on reducing end-user issues, is providing guidance around human interaction with NEWCARD.

The specification is slated for release later this year. Companies wishing to participate in the specification development are invited to contact PCMCIA. Currently, products supporting NEWCARD are scheduled to debut in the second half of 2004.

Randy Groves, CTO, Dell Product Group: “The NEWCARD standard will benefit corporate customers and consumers alike by increasing bandwidth and simplifying installation. We’re pleased to support NEWCARD and are excited about its implications for future architectures.”

Dan Forlenza, VP of Notebook Engineering, Hewlett-Packard: “HP believes PCMCIA NEWCARD will enable high performance, innovative form factors and improve the user experience. NEWCARD is the new expansion card of the next generation notebooks, which is why HP is actively involved in defining the specification.”

Jan Janick, VP of Development, IBM: “IBM is pleased to have been involved in the design of PCMCIA’s NEWCARD standard. Customers will benefit from the new format, which will provide higher performance in a smaller package, and enable IBM to create the next generation of smaller, sleeker devices for mobile computing.”

Anand Chandrasekher, VP and General Manager, Intel’s Mobile Platform Group: “NEWCARD is an exciting innovation for the existing PC Card form factor. By supporting two NEWCARDS in the space of one current device, mobile PCs will have increased flexibility in adding new functionality.”

Tony Pierce, Microsoft Corporation and Chairman of the PCI SIG: “The PCI-SIG is excited to be working with the PCMCIA on NEWCARD as the market momentum and applications for the PCI Express(TM) Architecture continue to expand across various market segments and innovative form factors. The PCI-SIG looks forward to collaborating with the PCMCIA and the USB-IF on joint enabling and compliance programs to ensure a range of interoperable products deploying exciting new applications in this form factor.”

Robert Schneider, CEO, SCM Microsystems Inc.: “NEWCARD addresses the need for a next generation, high-speed system bus standard and goes far beyond. The availability of both a high-speed single- and double-wide card enables development of critical new security applications based on smart cards, which are expected to become a key component of digital security. Long term, NEWCARD form factors can be leveraged beyond notebooks and handhelds onto open desktop systems. Once again, PCMCIA is paving the way for new technologies that bring immediate value to industry and help shape solutions that benefit the consumer.”

Jason Ziller, Intel Corporation and Chairman of the USB Implementers Forum: “Since USB is already the ubiquitous connection for peripheral devices in the industry, there will be lots of applications immediately available to put into the NEWCARD form factor. With the abundance of already certified USB-based silicon and the well-established USB-IF compliance program, USB will help to deliver high quality NEWCARD products to consumers.”