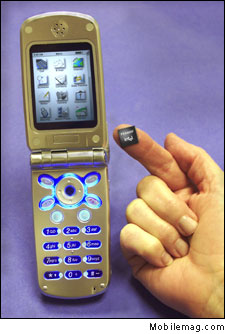 The highly integrated microchip is the first to combine the key components of today’s cellular phones and handheld computers onto a single piece of silicon – promising to bring advanced functionality, longer battery life and more innovative phone designs to mainstream phones.

“Intel’s ability to provide communications, computing and memory functions in a single chip is unmatched in the industry and promises to deliver outstanding performance, greater versatility and a richer experience to cell phone users worldwide,” said Hans Geyer, Intel vice president and general manager of its PCA Components Group. “As the industry transitions from voice-only phones to advanced devices that combine voice and data, the ability to effectively and efficiently combine advanced processing, memory and communications technologies will be required to drive the next-generation of cell phones.”

Bringing High-End Capability to Mainstream Cell Phones
Today, feature-rich phones that include integrated camera, color screen, and games have multiple components, and represent the most expensive and sophisticated portion of the cell phone market segment. However, history has demonstrated that when more capabilities are put on a single chip, the functionality of the device increases and production costs decrease.

By combining multiple functions through silicon integration, Intel has delivered a cellular processor with higher performance, lower power, and increased reliability that increases the capabilities of a mainstream, data-enabled cell phone.

Industry Support
The increasing availability of mobile content and the emergence of worldwide wireless data standards are driving the development of a new generation of data-enabled wireless devices for businesses and consumers. To assist phone manufacturers with the rapid development and deployment of wireless devices, applications and services, Intel has worked with communications industry leaders including TTPCom Ltd.*, Esmertec*, Elektrobit*, ADI*, RF Micro Devices, Inc.*, Dialog* and Jamdat* to offer a complete communications system in support of the Intel PXA800F cellular processor.

Pricing and Availability
The Intel PXA800F cellular processor is sampling today with production volumes expected in the third quarter of 2003. Products using the new processors will be available later this year, or early next year. The Intel PXA800F cellular processor has a suggested list price of $35 (US) in 10,000 unit quantities. More information on the new processors can be found at www.intel.com/info/gprs.