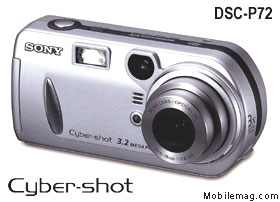 Sony Europe has today announced three new Cyber-shot digital still cameras that will make digital photography more accessible than ever. The three new models, the DSC-P32, DSC-P52 and DSC-P72 pack in more pixels and more features than their predecessors. They all offer 3 Megapixel image quality, produce stunning images in a diverse range of conditions and are easy and fun to use. The cameras are also amongst the first Sony products to be compatible with Memory Stick PRO*, which extends their data capacity up to 1GB.

Akihiro Nishikawa, Director Sony Digital Imaging Europe, commented: “Anyone who might be nervous about making the step to digital photography should try the new Cyber-Shot range. They are ‘point and shoot’ cameras that allow you to be spontaneous and take shots of real quality, whatever the conditions and, when printing the quality is perfect.”

Picture perfect
Picture quality, contrast and colour rendition are all superb across the range, and the cameras produce high quality prints. The 3 Megapixel resolution gives printed photographs a quality that matches analogue photography (up to standard 10 x 15cm) and allows users to zoom in tighter and crop to get the shots they want. The 14 bit DXP system plus Super HAD CCD combine to produce excellent image detail and stunningly smooth contrast and colour rendition.

More stamina, more features
The cameras are supplied with 2 AA rechargeable Ni-MH batteries and capacity has been increased by 30% over predecessors. For the DSC-P32, this produces stamina of up to 2 hours 40 minutes, which is equal to 320 shots under normal conditions.

The cameras are packed out with photographic features giving users everything they need to take great shots every time. New Scene Selection modes mean that perfect shots can be taken in even more types of difficult conditions without having to think about the camera set up. The new modes, “Snow”, which protects white from appearing too grey and “Beach”, which preserves the blue of the sea, are added to the existing “Twilight”, “Twilight Portrait” and “Landscape.”

Thanks to a number of improvements in the flash operation, the cameras are more intelligent in making adjustments to light conditions. A new exposure warning means you always have the right exposure. The camera will detect the exposure level before taking the shot and a warning blink appears if it is not enough. Slow Synchronized Flash operates at a slow shutter speed for shooting foreground objects in twilight backgrounds, giving clarity to the background as well as to the foreground. Auto Daylight Synchronised Flash automatically measures the exposure level for foreground objects, which have light behind them, and Flash White Balance will adjust for the correct white balance in colourful shots.

Many improvements have been made to make the cameras more easy and quick to use so that shots can be taken swiftly with minimum fuss. Start-up times have been reduced to one or two seconds and shutter time intervals are around one second. Newly designed control functions mean that the cameras can be operated by little more than the touch of a thumb.

The Burst Mode takes two shots in rapid succession, doubling the chances of acquiring those once-in-a-lifetime shots. The camera uses a buffer memory to temporarily speed up data transmission between shots and is ideal for sports, action and wildlife photography.

Movie magic
Users can capture far more than stills of their favourite moments with the MPEG Movie VX function, which makes it possible to make movies with sound in VGA quality. When used with Memory Stick PRO*, the camera has up to a staggering 1GB memory, allowing approximately 22 minutes of movie recording.

The new Sony Cyber-shot range, the DSC-P32, DSC-P52 and DSC-P72, will become available across Europe during March and April 2003.