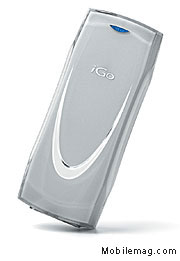 Mobility Electronics, Inc. has announced that it is now in production and is shipping “Juice,” the first product that allows users to simultaneously charge their notebook and mobile phone or handheld device from any power source – standard wall outlet, auto outlet, boat outlet or airplane outlet.

“We indicated several months ago in a press announcement that we were developing a product – now called Juice – which would significantly increase our revenues in the coming quarters. After over a year of development on this innovative new technology, I am happy to report that Juice has now been launched,” said Charlie Mollo, CEO of Mobility Electronics. “This product has received rave reviews from leading industry publications and the market has been eagerly awaiting the product’s full production and shipping.”

“Due to delays associated with the regulatory approval process for this new product category and normal start up production issues, we were not able to begin shipments in Q4 as previously anticipated. During Q4, however, we focused on building key channel relationships and partnerships, which has resulted a current backlog of about 20,000 units, all of which will ship in Q1 2003,” Mollo said. “We continue to develop several other significant retail and OEM deals which could greatly enhance our revenues in 2003.”

The iGo branded version of Juice will be available for the suggested retail price of $119.99 through leading distributors including Tech Data, resellers such as CDW, Insight and PC Connection, as well as through major U.S. computer hardware retailers and on iGo’s Web site (www.igo.com). Juice will also be available through European distributors including Ingram Micro UK, Portable plc, Newcom Distribution and Dicota GMBH; as well as retailers including Maplins, PC World and Dixons.

By combining the functionality of several power devices and compatibility with both AC and DC power sources, Juice eliminates the need to carry a separate notebook AC adapter, mobile phone adapter and/or handheld/PDA power adapters (with optional accessory). Business travelers and other mobile users can now replace bulky power-packs and numerous adapters with a single power source, eliminating extra weight and jumbled power cords. Juice is compatible with more than 600 of today’s most popular notebook computers, including brands such as Apple, Compaq, Dell, Fujitsu/Siemens, Hewlett Packard, Toshiba, IBM, Sony and Gateway.

“By combining the functionality of several power devices into one, Juice allows mobile users to carry fewer products and less weight,” said Mollo. “Mobility Electronics is committed to continually offer these types of solutions to satisfy the demands of mobile users.”