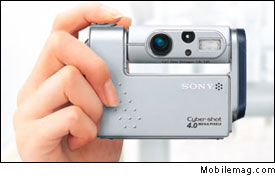 Sony Europe has announced a significant extension to its Cyber-shot family of digital still cameras. The DSC-F77 caters for the camera enthusiast that wants an advanced set of features and functions but also demands a sleek, compact and stylish camera. The camera’s compact and stylish design easily fits inside your shirt pocket and still these elegant good looks conceal a powerful 4.0 Megapixel Super HAD CCD and integrates advanced Carl Zeiss Distagon lens technology.

“In terms of appearance and operation the DSC-F77 offers a very different proposition,” commented Akihiro Nishikawa, Director, Sony Digital Imaging Europe. “The look and feel is very different but the quality and versatility is unmistakeably Sony Cyber-shot.”

The lens unit’s rotating capabilities further enhance shooting creativity. For example, the user can rotate the lens and take for instance a self portrait using the LCD to frame the shot. For normal shooting conditions, the DSC-F77 incorporates an optical viewfinder.

Combined with this operational versatility in the DSC-F77 is new Smart Zoom technology from Sony. Functioning in a new and different way from other zoom technologies, this advanced feature lets users enjoy a zoom function without experiencing any deterioration in image quality. By selecting a lower resolution it is possible for the user to zoom in (using SMART Zoom) – at 2 Megapixel resolution the camera provides 1.4x zoom, whereas at VGA image quality the user enjoys the equivalent to 3.5x zoom.

With a profile of just 27mm, the DSC-F77 represents one of the most compact, high performance and stylish cameras available. A rotating lens unit facilitates maximum creativity in shooting. The user can rotate the lens and take for instance a self portrait using the LCD to frame the shot. Alternatively, the built in optical viewfinder can be used to maximise the camera’s battery life.

The camera comes with a selection of prescribed scene mode settings, including twilight, twilight portrait, landscape and soft snap. With spot and multi-pattern metering combined with selectable ISO sensitivity up to ISO 400 the camera provides advanced shooting facilities in any light setting.

Another key benefit of the DSC-F77 is its operating speed, allowing the user to capture the moment as it happens. The rotating lens operates as an on/off switch – a feature which significantly reduces the time taken to shoot a picture. The camera takes less than one second to power up while it features a shutter time lag of only 0.35 seconds and a shutter interval speed of approx. 2 seconds. Another feature which speeds up operation is the latest high speed USB 2.0.

Cradled by Sony
When not in use, the DSC-F77 rests in a cradle which serves numerous functions. An in-built power terminal recharges the supplied Stamina Info Lithium battery, while an AV terminal interface connects the camera to a standard TV. Also, a USB connection facilitates quick and easy connection to a standard PC for image downloading. The cameras come bundled with image transfer software developed to help transfer the images from the camera to a PC easily and automatically. After connecting the camera to a PC (via the cradle or a USB cable) images are automatically up-loaded to a selected directory.