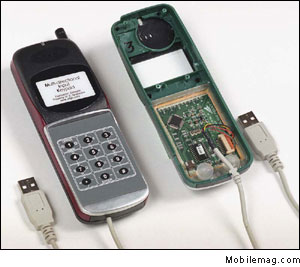 Over the past decade we have seen some many different trends develop in the industry; Mobile phones become PDAs and notebooks become desktops. Question is will PDAs ever become desktops? I wouldn’t start counting your pennies yet. Apparently people prefer a PC because of its two main advantages; easy input and a big screen. Performance is usually not an issue in many cases such as schedules, communication, word processing, simple calculations, etc. As inputing data into your PDA/phone becomes easier, the screen would have to be re-designed smaller because of the current trend of small, fully featured mobile devices.

As always, inputing data into your PDA/Cell is a pain in the rear end. The Customer is ready to sacrifice size of the display for sake of mobility, but input problems are much less tolerable.

Mobile devices such as PDA’s and mobile phones are especially attractive to the Customer when ALL of the input operations are provided by same hand holding the device. In this sense many input technologies like pen input, virtual keyboards, etc. are disadvantageous and will shrink to relatively shallow niche if a really quick one-handed input would be offered. The manufacturer, who does this first, will get great competitive advantage, especially in most prospective “young, fun, and stylish” market.

At the same time the more the look of the offered solution is familiar to existing customers, the more chances for success it will have. If not it can follow the fate of many potentially quick input methods which haven’t spread widely just because of looking too unusually like famous Dvorak keyboard, and/or being intuitively unclear, like cord keypads.

Why the Multi-directional Input Keypad?

The above introduction explains why the idea of the Multi-directional Input Keypad (the MIK™), Ukrainian patent 46628 A, PCT application filed, appeared. The idea itself is very simple and is actually an application of Unistroke approach known in PDA’s to the standard telephone keypad.

The MIK™ looks like a standard 12-key telephone keypad, this provides 100% legacy support and serves for compact size of the keypad.

Essence of the input method used in the MIK™ lies in the short lateral motion of a finger (supposedly the thumb of the hand holding the device) in a defined direction (North, East, South, or West) after touching the central part of the key uniquely defines the inputted symbol. The initial touch point and the trajectory of the following lateral movement uniquely defines the input symbol.

Digits 0-9 and *, # are inputted by short-time touch (pressure) of the proper keys without necessity to switch between characters and numeral input. These symbols, 0-9 and *, #, can also be input by stronger pressure on the moving buttons of the standard telephone keypad, just like it can be done in existing mobile phones (same legacy support).

Similar methods are used in diverse Unistroke approaches used over touch-screens of e.g. the PDA.

There are two keypads in the MIK™ – one “legacy” vertical keypad (12 keys) operated via vertical pressure, and one “horizontal” (12×4=48 keys) operated via rectilinear-like horizontal lateral movement of the thumb the hand holding the phone/PDA. So we have 60 “straight forward” keys in total, which is more than enough for comfortable input of any text information in mobile device.

Another advantage of the MIK is that it supports arbitrary pointing operations (like touchpads), which allows elimination of the navigation keys in the mobile phone, leaving more room for a display in same compact housing ( realization of this approach can make a clamshell design much less attractive).

What about the input speed, the error rate and customer perception?

One of the principal advantages of the MIK™ before other methods is that it is intuitively clear, so learning to use the interface is minimal. It can be operated from start-up with gradual growth of input speed with time. As the experiments with the prototype show, input speed of about 60 characters per minute (cpm) can be easily achieved by an average user just after 30 minutes of “playing” with the MIK™. Teenage users can easily achieve input speeds over 100 cpm in a couple of days of unsystematic training (2-3 hours of training in total). Again, training is not necessary to start using the MIK™ from very beginning, since it is intuitively clear.

Certainly, the error rate is another critical moment for the Customer perception. In case of the MIK™, the error rate depends on accuracy of the thumb positioning and on direction of subsequent lateral movement.
As the experiments with the prototype show, it is not even necessary to position a finger exactly on the central region of the key. Direction of the movement (North, East, South or West) and the key where the movement starts uniquely define the inputted symbol. For instance, for the key “2” – North as A, East as B, South as C, West reserved, the characters are correspondingly imprinted on the key “2” (A on the North, B on the East, C on the South).

There is no need to find the center of a key, just “get on the right key” which is a simple ergonomic task in this case (and the Fitt’s law is OK here). In order to distinguish lateral movement (“horizontal strokes”, characters) from touch or pressure (0-9, #,*) the movement threshold is introduced. If the lateral movement is more than the movement threshold then it is processed as the “horizontal stroke”, otherwise it is processed as a touch. This simplifies the whole concept significantly (both realization and operation).

As for a “big finger concern”, ample distance between the centers of the keys (e.g. 8 mm would suffice, this is enough for errorless input in most cases, and the keypad remains miniature) can be easily provided. The existing touch detecting methods allow deriving a center point of the touch region, thus simultaneous touch of the peripheral regions of adjacent keys is not a problem.

Building the MIK™ on a standard telephone keypad with movable buttons is favorable over a touch-screen approach. Most of the users with touch screens like to use their fingers, this may not be possible in some compact devices. This is why the the MIK™ is a better substitute over standard touch screens. Touch Screens also lack legacy support. At the same time, touch-sensitivity over standard telephone keypads with buttons is a well-developed technology offered by some touchpad manufacturers (e.g. Cirque Corp., www.cirque.com ), so industrial realization of the MIK™ should not be expensive.

The MIK™ only exists in the form of a working prototype based on the Cirque OEM touchpad (more details on www.vitgn.com). This prototype was demonstrated to some mobile phone manufacturers at CeBIT 2002 and was accepted with enthusiasm, people who tried it could easily input text without errors after short explanation of general idea of the method.

The MIK™ can also be built based on the Pressure Sensitive Keypad (the PSK, www.vitgn.com/psk.htm), patent pending, developed by the author, which allows ten changeable key modules with different layouts (divers number, form, function, and positioning of moving buttons in it) and no electronics in them (so very cost effective), what is great for the “young, fun and stylish” market.