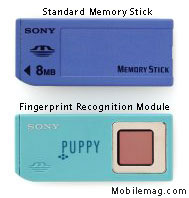 Sony Corp has developed a module to recognize fingerprints, and plans to release the new product in February 2003.

The small-sized, memory card-shaped fingerprint recognition module is to be inserted into a slot for a Memory Stick. The concept of such a fingerprint recognition module has been proposed by Toshiba Corp and Matsushita Electric Industrial Co, Ltd, a group of companies that are promoting SD Memory Card. Sony’s module, however, will be the first product commercialized in the industry.

The small fingerprint recognition module will be capable of certifying the identity of a user using the public key infrastructure (PKI). The new module will be embedded with a circuit to generate a key for public key encryption. Because data for the secret key will be stored in memories with high tamper resistance placed in the card, the risk of leakage of data for the secret key will be lower than that of saving such data in a personal computer. The module will allow only a person whose fingerprint is verified to use a digital certificate for PKI stored in memory.

In Japan, the digital signature and certification law was enacted, giving a digital certificate a legal basis equal to a registered personal seal. This means Sony’s fingerprint recognition module can be used as a “portable digital registered seal.”

Sony already has commercialized the FIU-710, a module with similar capabilities that uses a USB interface.