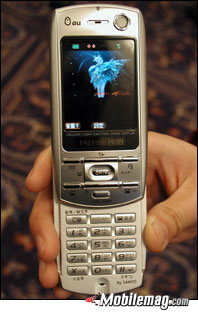 Sanyo has been conducting field tests by using 300 prototypes since the end of December. The tests are scheduled to last for six months. Sanyo said if the test results do not show any problems, it will start commercial production of the new phone in the summer of 2003.

Sanyo’s prototype is equipped with a 2-in. organic EL panel. It is not a folding type, which in Japan is currently the mainstay type of mobile phone. The phone has a keyboard under its display, and the keyboard appears when the display is slid upward (photo). Also, the phone has two CCD modules, one on its front side and the other, on its back, similar to the configuration of NTT DoCoMo’s “P504iS.”

Sanyo announced on Jan. 16, 2003 that it will launch mass production of full-color organic EL panels in cooperation with U.S.-based Eastman Kodak Co. The company plans to establish, before the end of 2003, a manufacturing system that allows it to produce 1 million panels per month, including small panels designed for mobile phones.

Sanyo expects that the market for medium and large-sized panels with a display size of 5.5 inches and larger to be used for various equipment, such as car navigation systems, will expand from about 2004. Thus, the company plans to invest 70 billion yen in the development of the EL panels in fiscal 2005.

As for the shipment of CCD modules designed for phones to other companies, Kuwano said that although the modules are currently in short supply, Sanyo will sharply increase the module production, aiming to expand its annual sales of the modules to 100 billion yen before the end of fiscal 2005.