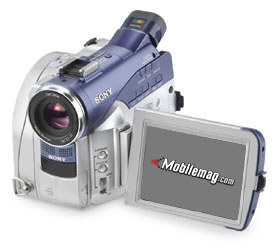 Sony’s new line of DVD Handycam camcorders advance the simplicity of making and sharing videos. The three new camcorders produce DVD recordings that play back in most current home and PC DVD players, as well as most later releases of PlayStation®2 game consoles.

“There is a universe of more than 100 million products that can play back Sony’s DVD camcorder recordings, making these DVDs one of the most compatible formats available,” said Steve Haber, senior vice president of the Digital Imaging Products Division at Sony Electronics. “In addition to their incredible compatibility, DVDs also present one of the easiest ways to shoot, play and share video memories.”

These new camcorders also capture JPEG still images for viewing on either your PC or TV. The DCR-DVD100 model captures 640 x 480 images, ideally sized for sharing as e-mail attachments, while the DCR-DVD200 and the DCR-DVD300 (Shown in photo) models incorporate a one-megapixel imager to produce higher quality video and still image resolution (1152 x 864). All three models can take thousands of still shots at the highest still resolution on a single 3-inch disc.

The disc-based recording system allows for quick access to favorite scenes and pictures without the fuss of rewinding and fast-forwarding. Thumbnail images of video are created from the start of every recorded scene.

Users never have to worry about recording over their irreplaceable memories as the camcorder intuitively only records on empty areas of the disc.

To further enhance the user experience, discs can be titled with customized descriptions, so “Holiday Party” footage is easily distinguishable from “Camping at Yellowstone.”

When recording on a DVD-RW disc, users have the flexibility to do some simple in-camera editing. For example, if the last recorded scene didn’t turn out perfectly, just erase the last video excerpt and shoot the desired scene in its place. In addition, when in VR (video recording) mode, users can design a playlist of their video clips, and rearrange the order of the scenes and images for a more customized finished product without modifying the video.

Each camcorder has multiple quality recordings options that can extend a disc’s capacity to hold up to 60 minutes of video.