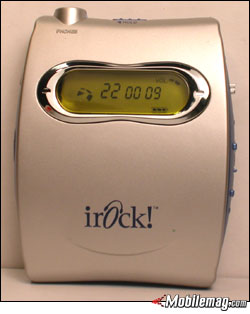 When I first saw the irock! 530 mp3 players sexy sleek design I wanted a first hand look at the device, so I contacted First International Digital. The unit is very sleek yet with a rock solid durable design. This is a high speed USB device which is capable fast data transfer speeds. It has an expandable memory SMC (SmartMedia Card) slot for adding another 128 MB giving you a total of 256MB and 4.5 hours of continuous music.

The irock player has a new type of control that I have not seen before. It is a little

toggle switch that has all the playback functions on it. Press the toggle in and it turns the device on, press it again and it plays. Flick the toggle up or down and it changes tracks, or even hold it down for fast forward. At first I didnÂ’t think the toggle would be very responsive, but after some getting used to it is extremely easy to use. The volume buttons are also on the same side as the wheel, making it easy to adjust the volume when driving (not recommended). On the other side of the device there is a Â“ModeÂ” button and the USB port. The Mode button allows you to change the Equalizer (EQ), Bass Boost, Repeat modes and Bookmark songs.

On the USB port there is a little rubber flap covering it to keep crumbs and dust out. On the top of the device is the headphone jack and a hold button. The hold button locks the device at its current settings so it does not switch tracks, modes, or volume if you have it loose in your pocket.

This is a great feature if you are a runner or someone who keeps a lot of change in their pocket. On the back of the device is the battery compartment and the SMC card slot with a little card ejector. The battery sits tucked away in the bottom of the device, and the only beef I have with the battery compartment is that when the cover is open there is only a thin piece of plastic that keeps it from falling off. I donÂ’t know how many devices I have that I have lost or broken the battery cover off of, but most of you are probably not as clumsy as myself and wonÂ’t break it, so don’t worry too much. The SMC slot doesnÂ’t have a cover and you can see a bit of the circuit board when you peek in, shouldnÂ’t be a factor unless you drop this thing in water, so keep it dry. Alright, enough with the psychical aspects of the device, and on to the actual software and performance.

The irock comes with its own software called the Â“irock! Download ManagerÂ”. The software is currently in version 1.21 and it is made by First International Digital (same company that makes the device). The software isnÂ’t the best looking stuff out there but it does the trick. I did a full 128 MB upload of songs to the device and it only took 8min and 15secs. When we tried to copy the songs back down to the PC we were confronted by a nasty copyright message saying that it wonÂ’t allow us due to copyright laws. Why include the feature if you cannot use it. The software didnÂ’t crash on me once, and it never hung, which is awesome because I have seen a lot of devices lack in the software department. The software did lack the ability to change the bit rate of the music on the fly like we have seen in other software packages but I donÂ’t really consider that a drawback. You can also use this device with MusicMatch software.

The sound quality of the device was flawless. I plugged it into the home stereo with the irock 300W and even regular car tape adapters sound great, definitely a plus here, no complaints. One tip for the end users, when you plug the unit into a home stereo or a car, set the volume on the device to “medium” and then use your receiver to adjust the volume or you will get poor low frequency sounds, this happens with every device.

The only setback on the device is there is no ID3 text display on the 530, but the newly released irock! 730 has id3 tag support. I donÂ’t see it as much of a setback you can fit about 18 songs on 128 MB, why do you need to see the track names anyways? The irock 530 has no backlit LCD display. In my opinion it’s not that big of a deal, how often do you listen to music in the pitch dark anyways, besides backlit LCD kills your battery.

Overall the irock 530 is one of the best mini MP3 devices I have reviewed. Its ease of use and sleek small design put it ahead of most it’s competitors. One of the best features is its price, $118 for a top of the line mp3 player! If you didnÂ’t need the 128 megs you could go for the 32 meg model of the same player for $39! DonÂ’t let the price fool you, itÂ’s a fully featured mp3 player.

Cons:
– No ID3 tag on the LCD display
– LCD display is not backlit, hard to read in the dark
– Pink arm strap? Warning, may cause friends and family members to question your sexuality!