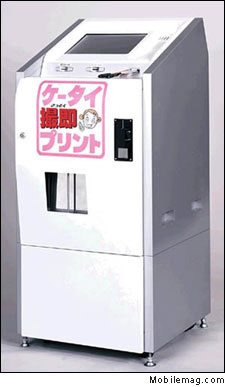 Omron Corporation will launch a new service business enabling users to conveniently create print seals from images taken by camera equipped mobile phones. The new print machines will be set up in major cities from January 15 as a trial service.

Using this service, pictures taken by mobile phones with built in camera functions can be turned into prints quickly and effortlessly. The user simply connects the mobile phone with Omron’s new seal print machine via a cable and the data is transmitted into the machine. Then, the user can select a picture and decorate it with a frame if so desired before printing it out. Compared with services that utilize data transmitted through mail, by creating prints using a connecting cable as in this service there are no unnecessary transmission fees and print quality is not affected by the image data compression of transmitted mail.

This service is compatible with phones sold by all carriers throughout Japan and this service will be made available to all camera equipped mobile phones introduced hereafter. Moreover, in April an upgraded version of the machine will be released with new added functions, including graffiti functions (users can write on the image before printing), a function for transferring image data via infrared transmission, and internet connection functions among other functions to satisfy a variety of needs.

Camera equipped mobile phones have spread rapidly in Japan, the number having already surpassed 10 million and expected to grow to 21 million within the current business term. Each mobile carrier has heavily promoted camera equipped mobile phones and some carriers have announced that camera functions will be a standard feature for all new phone models. Plus, the rapid shift to high-definition images has led to the imminent emergence of phones equipped with 1 mega pixel resolution. Taking these circumstances into perspective and anticipating the surge in user needs, Omron has answered with the development of a new print station.

Omron has a history of anticipating society’s needs and responding in advance, as evidenced by its contribution to social infrastructure through the pioneering development of automation equipment such as the ATM and automatic ticket gate. Even in the amusement industry, where Omron owns a significant share of the print seal machine business, expanding the business for digital camera compatible print seal services is just one of many achievements. Based on this experience, Omron will launch this new service business from April aimed at mobile phones and make a full-scale entry into the enormous print service market.

The availability of this product is limited to Japan only.