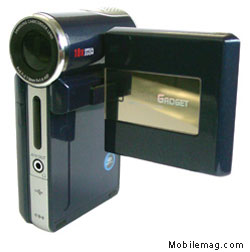 Samsung Electronics has unveiled the ITCAM-7 – the world’s first Hard Disk Drive (HDD) digital camcorder. The device offers today’s consumers a variety of options to capture their favorite moments – whether on video, audio or image.

Rather than tape, Samsung’s ITCAM-7 uses a 1.5 GB HDD to store still and motion pictures, as well as music, audio and data files – enabling it to hold more than one hour of high-quality footage. And, thanks to its built-in USB 2.0 port, transferring an hour of footage to your computer takes only five minutes.

“ITCAM-7 is not just a revolutionary camcorder; it is a portable digital entertainment device with a myriad of functions,” said Mr. Man-Yong Shin, Executive Vice President & General Manager, Digital Video System Division of Samsung Electronics. “It is part digital camcorder, part portable video player, part MP3 player, and part portable hard drive – and these are only a few of its long list of features.”

The ITCAM-7 saves each new shot as a separate media file, making it possible to locate a specific clip instantly and simple to organize media clips for editing. Editing software is bundled with each ITCAM-7 for consumer convenience.

The ITCAM-7 also works as a portable movie player. An MPEG-4 media file can be played back – 30 frames per second – at 640×480 screen resolution on its two-inch trans-reflective screen, or a TV screen. Through its embedded RCA port, the ITCAM-7 can connect to a television or VCR to display or record audio-visual content. Media formats such as MP3s are also supported for playback.