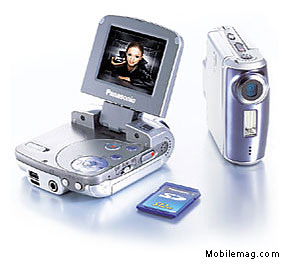 All the rage since their debut two years ago, Panasonic’s line of incredible e-wear products have redefined “hip.” The 4-in-1 SD A/V devices snap digital images, shoot digital video (MPEG 4), record speeches and even play your favorite digital music files. Each fits in the palm of your hand, in your pocket, or can be worn around your neck.

“These two new models will strengthen an already strong e-wear line,” said Reid Sullivan, Vice President of Panasonic’s Entertainment Group. “Our e-wear products are super small, Internet enabled and fun! With improved video resolution, a cool new design and the ability to record your favorite TV shows, both of these models deliver on that promise.”

These e-wear devices incorporate SD technology — the compact, high-capacity storage medium developed for audio, video and computer applications — to record multiple media using just one versatile format. Audio and video recorded and saved on the removable SD Memory Card can be downloaded to a PC1 to store, edit and e-mail. With over 500 member companies in the SD Association offering products that use the SD memory card, it is quickly becoming the de facto standard of flash media.

The players’ new user-friendly interface makes recording easy at the touch of a button, without having to scroll through menus. Both units feature enhanced picture quality with an MPEG-4 frame rate (15 frames per second) for video and 680 x 480 resolution for JPEG still pictures. A swiveling 2-inch LCD screen and two record buttons allow users to shoot comfortably with the unit in either the horizontal or vertical position. A new 2x digital zoom* helps bring subjects into closer view.

The SV-AV20 and SV-AV30 include a built-in flash for taking digital still pictures in low-light situations.

Both units are compatible with the MP3 and AAC formats. A built-in USB interface makes it easy to transfer music from a PC to an SD Memory Card for playback, while the included SD Jukebox software provides a simple way to catalog and save numerous digital music files in a single database on a PC. The software also accepts digital still images, enabling those with an artistic flair to set their images to music for a custom-made music video. A built-in speaker lets users listen to any recorded audio.

Model SV-AV30 features a unique A/V docking station that connects to a TV for viewing video and still images, or to a VCR for recording favorite TV programs and viewing them on the go. The docking station also includes a built-in battery recharger to power up the SD A/V player.

The SV-AV20 and SV-AV30 e-wear 4-in-1 A/V SD recorders are planned for April, 2003 availability at retail. The SV-AV20 will have a manufacturer’s suggested retail price (MSRP) of $299.95, including a 32MB Panasonic SD Memory Card. It will be available in Blue or Silver. The SV-AV30, which includes a 64MB Panasonic SD Memory Card as well as the docking station, will have an MSRP of $399.95.