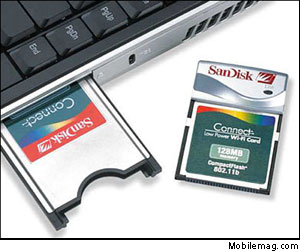 SanDisk Corporation has introduced a line of wireless Wi-Fi (802.11b) cards with the world’s first card products to include both memory and wireless communications technology. The new SanDisk Connect(TM) product line was introduced at a press conference at the Consumer Electronics Show.

The announcement marks SanDisk’s entry into the wireless communications market and comes at a time when Wi-Fi, also known as WLAN for wireless local area networks, is emerging as the main worldwide wireless standard. Market watchers at Gartner Inc. report that some two million mobile surfers in North America already use Wi-Fi, and it expects that number to double by next year.

Nelson Chan, SanDisk senior vice president and general manager of SanDisk’s retail business unit, said, “Access points that allow mobile computer users to wirelessly connect to their email and the Internet are rapidly being deployed around the world — from hotels, airports and universities to cafes, coffee shops and corporate campuses. With these new SanDisk Connect cards, people on the go can quickly transmit and receive data, images and music from any of those thousands of locations.”

He added, “The cards bring wireless connectivity to a host of new products including handheld and notebook computers, digital cameras and MP3 players. By combining both flash memory and wireless communications in one card, people going on a business or pleasure trip can load up the card with family pictures, data files, spread sheets and Power Point presentations and have everything they need, plus wireless connectivity, on one card. This is becoming quite important to consumers and business users because many handheld and notebook computers have only one card slot and users are forced to decide between using the slot for connectivity or for storage. These SanDisk Connect cards solve that problem.”

Will Strauss, president of Forward Concepts, a Phoenix-based market research firm, said, “It’s clear that the WLAN market growth is truly phenomenal, with 802.11 network interface card shipments growing over 100 percent in 2002 to 13.2 million from 6.4 million in 2001. We forecast that 138.7 million of these network interface cards will ship in 2006 for a compound annual growth rate of 85 percent from 2001. The mobility that WLAN provides ties in well with the compelling need for portable data storage, which makes the SanDisk Connect products very compelling.”

SanDisk expects that consumers will use the new Connect combination cards in various ways. For example, several camera manufacturers are exploring the development of new digital cameras (with single card slots) that would enable photographers to use a Connect dual-function card to take pictures and then use wireless connectivity to send the images to friends or business associates.

Combining flash memory and Wi-Fi in one card also represents a cost savings to consumers because if the cards were bought separately, they would cost considerably more.

Devices enabled with Wi-Fi cards, such as SanDisk’s Connect cards, can transmit and receive data at speeds up to 11Mbps (megabits per second) at a realistic range of up to 300 feet from the nearest access point. SanDisk’s Wi-Fi cards have one of the fastest data transfer rates in the industry.

SanDisk’s new Connect cards have been designed with low power consumption to minimize battery drain, a key consideration for PDA and notebook users. The CF Connect line can be used in multiple devices because they support both WinCE PDAs and Windows laptops and notebooks. The cards also have been simplified for easy installation, and security encryption keys are included with the products.

The Wi-Fi (802.11b) CF and SD Connect cards have a suggested retail price of $99.95. The dual-function CF cards with 128MB of capacity will be priced at $129.95 while the dual-function 256MB SD cards will be priced at $149.95. The CF Wi-Fi card is available now, the CF dual-function card and the SD Wi-Fi card will be available in March and the SD dual-function card is expected to ship at mid-year. The CF pricing includes a PC card adapter for notebook and laptop owners. SanDisk Connect cards will be sold in many of the 50,000 retail stores worldwide where SanDisk branded products are sold.