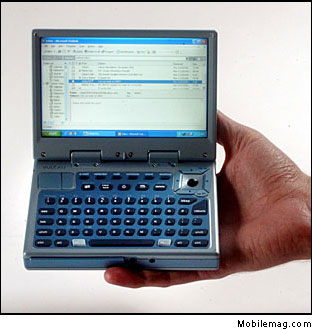 An unknown group within billionaire Paul Allen’s Vulcan Inc. empire has designed a compact, lightweight, wireless computer that is expected to debut for Christmas 2003 for around $1,500 USD.

The device code named “Mini-PC”, was previewed at the CES Show in Las Vegas last week.

Vulcan Inc. hopes that the product will attract mobile computer users that are willing to pay for wireless transmitions of movie trailers and other content. The content will be produced by companies such as Dreamworks SKG movie studio in which Vulcan has invested in.

The Mini-PC is slightly larger than a PDA, but unlike the Vulcan machine PDA’s can’t use Microsoft Corp.’s full-featured Windows XP OS or run all the programs that operating system supports, said Mike Agostino, a technology associate in Vulcan’s investment management group.

Our device is far smaller than a conventional laptop computer. About the size of a paperback book, 1 inch thick and weighing about 1 pound. Its less then half the size of the Sony VAIO U1 laptop, and about 60% of the weight, Vulcan says.

It has a folding 5.8-inch screen with 800 by 400 resolution, a 20-gigabyte hard drive and a downsized keyboard designed for thumbing or hunt-and-pecking. An external keyboard and mouse can be attached.

Batteries last for up to four hours on a single charge. Software is loaded through a USB 2.0 port on the back, which accommodates an external CD-ROM drive.