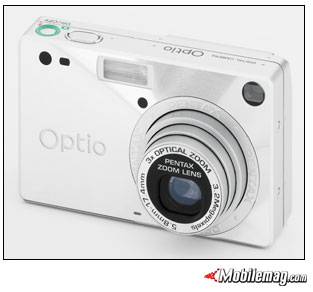 When PENTAX debuts the OptioS January 9 at the annual International Consumer Electronics Show* (CES) in Las Vegas, they’ll be using Altoids® mint containers and decks of playing cards to show that this advanced-stage camera is smaller than both items. CES is the marketplace where the latest in consumer equipment, gadgets and household items are unveiled to the buying public. The OptioS is the smallest PENTAX 3.2 megapixel camera, small enough to fit in an Altoids Mint Tin.

The face of the OptioS is smaller than the size of an average credit or business card and just over ¾ inch thick, but still it is a high-quality 3.2 effective megapixel, 3X (6X combined) zoom digital camera with a sleek design and a tough aluminum alloy case.

“Don’t let the size fool you. This is one well-built camera, which just happens to be the right size for a shirt pocket or purse,” said PENTAX marketing V.P. Jim Leffel. “Even men with larger hands will find it easy to maneuver the buttons and set up photos.”

The OptioS, while unveiled at CES, will be shipped to major camera retailers around the end of March 2003. Leffel expects demand to be strong because of the PENTAX reputation for quality.

How does PENTAX load so much into such a small space? Carrying on the strong PENTAX optics tradition, the OptioS features a patented sliding lens zoom mechanism that allows the camera’s powerful 3X optical lens to fully recede into the camera housing, flush with the body frame. This novel system helps protect the lens and helps reduce the size of the OptioS by almost 60 percent compared to the PENTAX Optio330RS. A new Multi Chip Module in the circuit board and the redesigned chamber have further minimized free space in the OptioS.

Despite the size, OptioS is packed with features found only on larger, higher-priced digital cameras: a movie mode with sound playback, a voice recording mode for attaching 30-second memos to selected images, a well-placed 1.6-inch LCD monitor, approximately 11MB of built-in memory and a powerful rechargeable lithium-ion battery.

This little camera delivers a big punch with its variety of shooting modes, including super macro, which captures images from just under 2.4 inches away, and infinity-landscape, which is great for shooting panoramic landscapes.

“The OptioS reflects the innovation, reliability and durability that are hallmarks of the PENTAX digital brand,” said Michelle Martin, PENTAX spokeswoman.