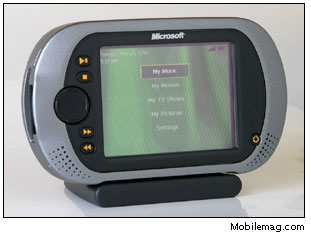 During his keynote address at the 2003 International Consumer Electronics Show (CES), Bill Gates, chairman and chief software architect of Microsoft Corp., unveiled the first prototype of a portable media player (PMP), based on the device platform code-named “Media2Go.” “Media2Go” devices are handheld personal media players that enable entertainment on the go by providing consumers with an easy and complete solution to download, store and play back all their favorite digital media content including video, music and photos. Microsoft also announced that it is working with Intel Corp., whose early pioneering work on the personal video player (PVP) led to jointly delivering the first “Media2Go” hardware reference design developed on the Intel XScale-based processors.

In addition, Microsoft announced that leading consumer electronics companies, including Samsung Electronics Co. Ltd., ViewSonic Corp., SANYO Electric Co. Ltd, and iRiver are planning to deliver a variety of PMP devices based on “Media2Go” for the 2003 holiday season.

Microsoft will be unveiling prototypes of these devices at CES, where they will also announce the initial technology partners, including Intel Corp, Samsung Electronics Co. Ltd., ViewSonic Corp., SANYO Electric Co. Ltd, and iRiver.

Devices will be available in time for the 2003 holiday season. As for the price, it’s a little early for our partners to have prices established, although we would expect the devices to be priced competitively to existing portable media. For example, portable DVD players generally cost upwards of $500 USD, and you can get a portable music player for a couple hundred dollars.

“Consumers around the world are discovering, downloading, managing and playing back digital photos, music and movies on their Windows-based PCs,” said Jim Allchin, group vice president of Platforms at Microsoft. “It’s time for the next big step. ‘Media2Go’ is the catalyst for a new generation of smart portable media players that will make all your favorite content from your PC available to you, wherever you are, whenever you want.”

The Complete Way to Enjoy Videos, Music and Pictures on the Go

Today, consumers require a variety of portable devices to experience all their digital content while on the go. Now, with a single “Media2Go” device, consumers can enjoy their digital music, video, and photos any time and anywhere. “Media2Go” combines the playback and management functionality of an MP3 jukebox, the viewing capabilities of a portable DVD player, the ability to view authorized content from a personal video recorder as well as the capability to share digital photos. “Media2Go” devices enable consumers to watch and listen to their digital media content wherever and whenever they want. For example:

Watching a favorite movie on a long plane journey
Playing back favorite prerecorded TV shows while on a bus to work
Entertaining the kids in the back of the car with their favorite cartoons
Listening to favorite songs or watching music videos while working out in the gym
Showing off the latest pictures or home movies of children to grandparents and friends
“Media2Go” provides complete support for a broad range of media formats, including Windows Media® Audio, Windows Media Video and MP3. The high quality and small size of Windows Media Audio and Video files mean that consumers will be able to store lots of high-quality content on their “Media2Go” devices: up to 8,000 songs, up to 175 hours of VHS-quality video and up to 30,000 digital images on 20 GB of hard disk storage.

Moreover, “Media2Go” will allow consumers to transfer their media content from their Windows XP-based PCs to a “Media2Go” device easily and quickly using technology called Sync & Go developed for the Microsoft® Plus! Digital Media Edition for Windows XP. Sync & Go will quickly download consumers’ favorite digital content from their PCs to a “Media2Go” device using fast connections such as USB and IEEE-1394, giving them the freedom to experience the digital media they edit and organize anywhere, any time.

“Media2Go” is based on Windows CE, the robust, real-time operating system designed to build and power the next generation of smart mobile and small-footprint devices.