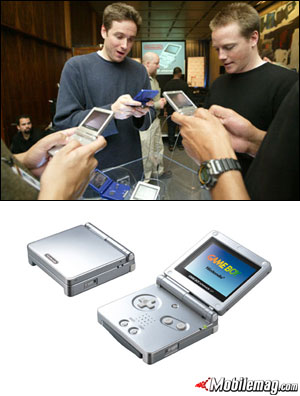 Nintendo of America Inc. has announced the introduction of Game Boy® Advance SP, a redesigned version of the wildly popular Game Boy Advance. The system has a new illumination feature and sleek flip-screen design making it the most distinctively stylish, compact and portable Game Boy system ever.

The Game Boy Advance SP will become an instant “must-have” gadget when it launches in North America March 23, 2003, for an estimated retail price of $99.95. It will launch in two colors: cobalt (metallic) and platinum.

Building on the significant improvements and refinements already introduced in the current Game Boy Advance, the new Game Boy Advance SP features a revolutionary Front Light Screen making game play easy in any lighting condition. The system is powered by a rechargeable Lithium-Ion battery good for about 10 hours of game play and takes only three hours to recharge. Amazingly, the battery life increases to approximately 18 hours of continuous play when the Front Light Screen is turned off.

“Both Game Boy Advance and Game Boy Advance SP reflect the best the video game market has ever seen in hand-held gaming,” says Peter MacDougall, executive vice president, sales and marketing, Nintendo of America Inc. “For those who must have the latest in technology and edgy design, Game Boy Advance SP delivers the ultimate in portable gaming.”