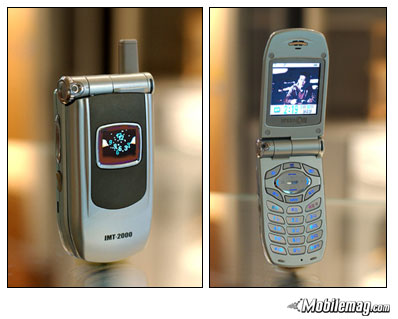 While color display models lead the Korean market this year, manufacturers will come out with a steady stream of new products that stress multimedia functions.

For its part, Samsung Electronics has chosen to build a camcorder into its latest-concept mobile phone line, which will be aggressively marketed.

Camera phones are limited to taking still pictures. However, the camcorder phone can shoot and store video and sound clips.

In the first half of last year, Samsung Electronics unveiled the SCH-V300, an IMT-2000 mobile phone with camcorder function built in. This month, the company is introducing the SCH-V310, the first full-blown camcorder phone model.

The SCH-V310 is capable of making 2-way video calls, supporting video on demand service or recording and storing video clips complete with sound. The main screen is a TFT-LCD that can reproduce 262,000 color shades, while a 256-color organic electro-luminescent (EL) display is placed on the outside.

Samsung Electronics will also soon complete development of the SCH-V330 and SCH-V3000 camcorder phone models with even more sophisticated functions.

The 300,000-pixel camera built into all these models features a 2-power zoom lens with nine settings.
They can shoot and store up to 20 minutes of video clips with sound, and the video is played back on a high-quality TFT-LCD with a color gamut of 262,000. The user only has to press the shutter once to shoot clips at 11 frames a second.

Next-generation models had built-in cameras, and now camcorders are being built in. The market for these latest ‘camcorder phones’ will be initially formed this year, and we expect these models to make up 10-15% of the Korean mobile phone market in 2003.”