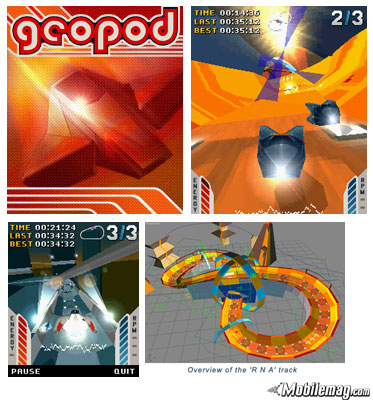 In the year 2048, racing tracks and cars became history. A technology called Geopod was developed. It allowed the construction of tracks that defy geometry and produce groovy sounds. Now, special hover crafts racing on these fast and funky surfaces are bound to your mobile phone.

The X-Forge 3D Game Engine is built with Fathammer’s industry leading X-Forge technology. X-Forge is a cross-platform suite of APIs highly optimized for the technology, form factor and configurations of current and future mobile devices. The game engine is a complete SDK and suite of development tools which allows for rapid development of high quality 3D games.

Geopod is the first game to ever use this technology. It brings the sense of speed into mobile gaming – it is a fast and furious racing game with unprecedented 3D graphics. It is your task to take the helm of a hover craft and compete against opponents on rollercoaster-like race tracks. In the career mode, you engage in a quest to become the Geopod champion.