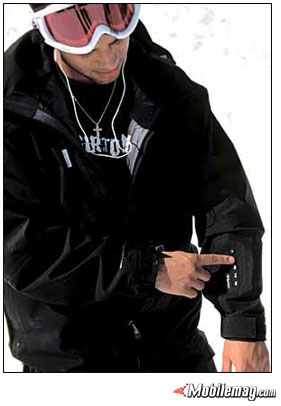 Burton Snowboards and Apple® today unveiled the limited-edition Burton Amp, the world’s first and only wearable electronic jacket with an integrated iPod™ control system. The Burton Amp is a durable waterproof GORE-TEX snowboarding jacket made exclusively for use with iPod, Apple’s wildly popular portable digital music player. The Burton Amp and Apple’s iPod together make it effortless for snowboarders and other active users to control their music from right on the sleeve of their jacket without fumbling with zippers, gloves or pockets. The Burton Amp jacket is designed for use with Apple’s 5GB, 10GB or 20GB iPod (purchased separately).

“This is so cool—having your entire music library with you on the slopes and being able to control it all from the arm of your jacket,” said Philip Schiller, Apple’s senior vice president of Worldwide Product Marketing. “Whoever thought you could have up to 4,000 songs and all your playlists, with over 10 hours of battery life, with you everywhere for a full day of riding.”

“Music and snowboarding have always been intertwined, but enjoying them simultaneously has been somewhat of a nightmare,” said Jake Burton, founder and owner of Burton Snowboards. “Thanks to the combined focus of Apple and Burton, those days are over.”

“My favorite thing about the Burton Amp is it’s like having a portable DJ booth in your jacket,” said Keir Dillon, Burton Global Team Snowboarder. “It makes changing songs before a pipe contest or on the lift so much easier—you don’t have to take off your gloves or unzip anything.”

The Burton Amp jacket integrates the iPod control system into the jacket using SOFTswitch technology, which allows the iPod to be controlled through a soft, flexible control pad integrated directly in the arm of the Burton Amp jacket. Riders simply touch the control pad on the jacket sleeve to change songs or volume levels, while the iPod is held safely in the jacket’s chest pocket. Constructed with GORE-TEX three-layer fabric, the Burton Amp is waterproof, seam-taped and machine washable (when the iPod and interface module is removed.)

Available in both Mac® and Windows versions, iPod holds up to 4,000 songs and is the only portable digital music player with Auto-sync, an innovative feature that automatically downloads an entire digital music library into an iPod and keeps it up-to-date whenever the iPod is plugged in. iPod is available in three configurations: a 5GB model that starts at just $299 (US); a 10GB model that is 10 percent thinner for just $399 (US); and a 20GB model that can hold 4,000 songs for just $499 (US). Both the 10GB and the 20GB models feature the industry’s first solid-state touch wheel for incredible precision, accuracy and durability, and include a new Apple carrying case and wired remote.

With iPod’s built-in FireWire® port, an entire CD can be downloaded in less than 10 seconds and a massive 4,000 song library can be downloaded in just over 30 minutes, versus the more than 13 hours it would take to transfer 4,000 songs with USB-based devices. The iPod’s battery provides up to 10 hours of continuous music and recharges automatically whenever iPod is connected, using power supplied over the FireWire cable. For Mac users, iPod includes iTunes™ 3, Apple’s award-winning digital music software.* For Windows users, the iPod works seamlessly with MUSICMATCH Jukebox, the number-one selling music software for PCs.