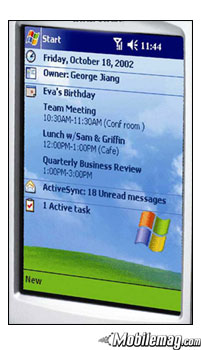 Microsoft’s investment in CDMA is in response to the technology’s growth both in the United States, where CDMA is the most widely deployed network, and abroad, where CDMA adoption has increased 31 percent since last year.*

“Microsoft recognizes that our device manufacturer and mobile operator customers use different network technologies; with the recent growth of worldwide CDMA subscribers, the time is right for us to support this key technology,” said Juha Christensen, corporate vice president of the Mobile Devices Division at Microsoft. “With CDMA support for the Smartphone and Pocket PC, Microsoft hopes to ignite innovation and business opportunity, and delight users with smart, wireless computing on any network.”

Device manufacturers and mobile operators can now take advantage of the rich functionality, customization and flexibility of Microsoft’s Smartphone and Pocket PC software to deliver new customer benefits such as rich media, personal and corporate e-mail services, and instant messaging. Today, more than ever, developers of Windows can extend their expertise and applications to Windows Powered smart devices, knowing that the marketplace for wireless Pocket PC and Smartphone-based products will grow substantially with the completion of this CDMA software.

Microsoft has been working closely with leading CDMA companies that expressed their support for this announcement.

“With the potential growth of mobile computing and dynamic multimedia services on the enhanced Sprint Nationwide PCS Network, we look forward to being able to offer our customers the advanced data services enabled by Microsoft’s Windows Powered software for CDMA networks,” said John Garcia, senior vice president of sales and distribution for the PCS division of Sprint.

“As wireless handsets evolve to offer richer applications and greater Internet-browsing capabilities and to further meet the needs of consumers’ fast-paced lifestyles, the availability of powerful, dependable software to support these advanced features is critical,” said Peter Skarzynski, senior vice president of the wireless terminals division at Samsung. “Samsung is pleased to be working with Microsoft to bring new CDMA devices, such as our SPH-i700, to market in the first half of 2003. Consumers and business professionals will be able to enjoy the familiar Microsoft interface on a sleek Samsung CDMA wireless device with the benefit of a brilliant color screen and an integrated camera.”

“Microsoft’s Windows Powered software for CDMA networks brings Hitachi’s excellence in hardware to the next level, allowing its Multimedia Communicator based on Pocket PC Phone Edition to bring feature-rich multimedia applications such as e-mail, photos and rich data to CDMA network subscribers. Hitachi is pleased to extend its global leadership in the worldwide electronics industry by bringing the first-ever Windows Powered device for CDMA networks to market,” said Shigeru Matsuoka, general manager of the Mobile Information & Communication Appliance Division of the Ubiquitous Platforms Systems Group at Hitachi Ltd.