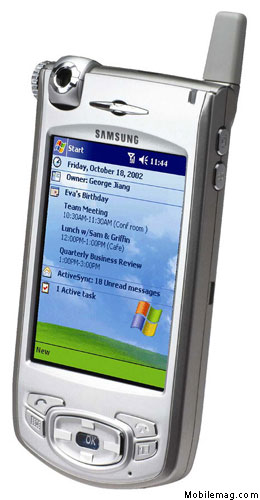 Both phones are based on Microsoft’s Pocket PC 2002 Phone Edition operating system. The software giant Monday announced that the software is now available for CDMA wireless networks. CDMA is the predominant standard in the United States. Likely to be sold through Sprint in the USA.

Samsung took the wraps off the i700, which features a color TFT screen and built-in VGA camera designed to take advantage of new picture messaging services.

Samsung has not said who will carry the phone.

Hitachi’s Multimedia Communicator also includes a built-in camera, and is the first Pocket PC to have an integrated thumbboard. The phone will be available to Sprint PCS subscribers in the first half of 2003.

Specifications and pricing were not available for either phone.