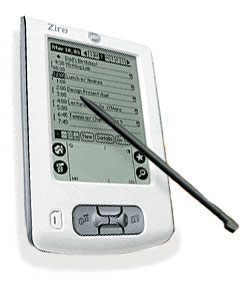 A few weeks ago the folks at Palm sent me their latest incarnation to play with. The new standard for cheap handhelds, the $99USD ($169 CAD) Zire manages to get all the basics covered while still maintaining a bit of style.

First up, this was NOT designed with me in mind. No, this one is for those people who actually use a paper date/phonebook and would like the convenience of a PDA. With only 2MB of memory, 16Mhz processor, 2 application buttons and no backlight, this unit was built to do just that. And, since I go nuts in about a week if I can’t figure out how to do more and more with my new toys, I decided to see how it would hold up with someone who doesn’t even use a PDA. Yes, my wife carries an actual paper and pen organizer and phone book. Yes. I hang my head in shame. No, she doesn’t make her own ink from berries at home.

My desperate attempts to bring her over to a Handspring about a year ago were, to say the least, unsuccessful. She found the unit a little awkward and far too geeky to display in public. My efforts at explaining all the different things she could do with it just fell on deaf ears. Eventually, it came to light that the unit was being used to hold up a faulty picture frame in her office. Now, with that said, I handed her the Zire:

This time, I just handed her the blister pack and disappeared. No explainations, no lessons and no help of any kind. One week later, I was amazed to see that she was actually using it! When I asked her how she could ever see worth in a handheld without a backlight she just laughed and said that she doesn’t use her paper organizer in the dark either. And apparently, the lack of serial ports (it uses mini-USB) was no big deal either. And she DOES love the look of the Zire. The 111 x 73.6 x 16 mm , 109 gram silver and white unit is firmly ensconced beside her compact and sees regular action. She particularly liked the cool blue rubber screen covering which prevents any unexpected scratches and can be flipped open or closed with a simple flick of the wrist.

When I asked her about an overall review on the product, my wife had only this to offer: “It’s simple, elegant and low-cost. That’s what I wanted”

Well, it’s been 3 weeks now and my wife just “beamed” me a contact. Maybe there’s hope for her yet.

The Palm Zire is available just about everywhere. Check out the full specs for yourself at: http://www.palm.com/products/handhelds/zire/