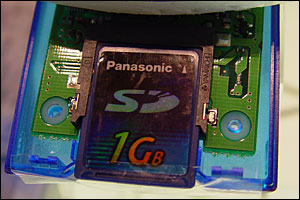 Matsushita Electric Industrial Co. Ltd. has unveiled a working prototype of a SD (Secure Digital) memory card with a 1G byte capacity, at the Ceatec 2002 exhibition.

The company, which is better known by its Panasonic brand name, said the card is not expected to go on sale until around one year from now when a larger market for such a capacity card exists and production costs have fallen. The card will be the first SD memory card to take advantage of a higher speed interface that will be able to shift data between the card and device at up to 20MBps (bytes per second) — double the speed of current 256M-byte and 512M-byte cards and 10 times the speed of cards that are up to 128M-byte capacity.

Matsushita’s current SD memory card road map calls for a 2G-byte card to follow the planned 1G-byte version sometime in 2004 and then cards in 4G-byte, 8G-byte and 16G-byte capacities to follow from 2005.

Alongside the new memory card, the company was also demonstrating prototypes of new products based around the SD system, including a media storage device. It accepts both an SD memory card and PC Card hard disk drive and is capable of transferring images from the card to the hard disk, enabling it to be used to back up a card. At 250 grams, it is also light enough to be taken on vacation to back up cards when they become full, removing the need to buy many cards.

The device also has a TV mode which users can use to drive a slideshow of stored digital images when connected to a television set.