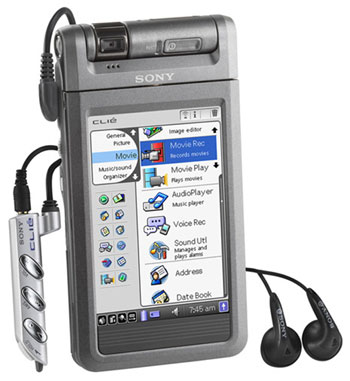 The first Palm OS 5 handhelds have been announced, and they’re not coming from Palm. Sony’s new CLIE PEG-NX60 and PEG-NX70V series pack OS 5, as well as Intel XScale processors.

Rumors have been abundant when it comes to Sony’s new CLIE PEG-NX60 and PEG-NX70 series; launched in Japan only a matter of hours before it was announced for the rest of the world, Sony has pulled off announcing the specifications of the world’s first handheld based on Palm OS 5 – utilizing an ARM processor and packing more punch than any other Palm OS handheld to date.

The CLIE PEG-NX70V (available in gun metal grey and silver) and PEG-NX60 (silver only) are powered by a 200 MHz ARM-compliant processor, and run the new Palm OS 5 operating system. Among the more notable features offered, the new devices enable users to take photos and record video clips, record voice memos, and wirelessly browse the Internet on a Wi-Fi (802.11b) network with an optional Sony wireless LAN card in a CompactFlash-sized format, in addition to playing MP3 audio files and video games.