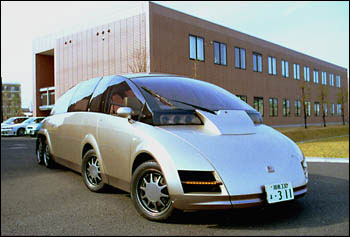 “It looks like something out of Star Trek, runs like a train but eats up the road – the eight-wheel-drive KAZ is the world’s fastest electric vehicle.

Lithium-ion batteries that deliver 55 kw of power to each wheel drive the car’s sleek silver body at speeds in excess of 310 kmh, which would give any Japanese bullet train a run for its money.

KAZ, which stands for Keio Advanced Zero-emission vehicle, is the culmination of a five-year joint project between Tokyo’s prestigious Keio University and the state-run science-promotion body, the Japan Science and Technology Corporation.

The project was headed by Keio engineering professor Hiroshi Shimizu and the vehicle designed by the Italian firm of I.DE.A Institute.

The space-age car uses the same battery technology as cell phones and was produced in cooperation with 14 Japanese companies including tyre maker Bridgestone Corp.

The toughest part of the 500-million-yen (S$7.3-million) project had been getting KAZ up to high speed.

‘Our goal was to generate a maximum speed of around 300 kmh but we had only a week to test-drive in Italy and had to work day and night to fix problems,’ Prof Simizu said after taking his ‘baby’ for a test drive, turning heads in central Tokyo at the weekend.

‘When KAZ succeeded in running at 311 kmh, it was so fast that our photographer couldn’t take a picture.'”