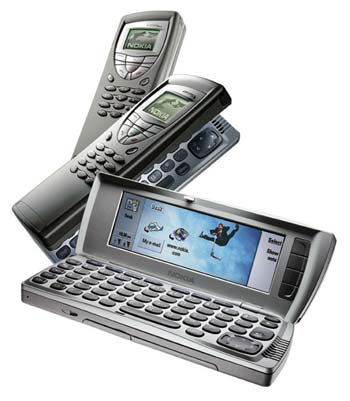 The guys at Nokia recently sent me their own version of the Uber phone, the Nokia 9290. It’s been out for a while in the UK but only recently became available in North America. First up, it runs off a GSM network (Microcell/Fido) so coverage is not as good as it could be. If you stay in major rural areas you should be fine.

A breif look at the hardware specs: the unit weighs 8.8-ounce and measures 6.1 by 2.3 by 1.0 inches. And yes, it feels huge in your hand. It’s packed with a 32-bit Strong Arm processor CPU and backed up with a total of 40 MB of flash RAM for the user, app and execution memory. An MMC slot provides for future expansion. The closed “phone” mode, the Nokia 9290 has a standard dial pad, flip out antennea and a six-line monochrome 0.8- by 1.2-inch screen which displays standard call info. Nokia rates the talk time at 10 hours and standby at 10 days. Open it up though and you reveal the gorgeus .4- by 4.3-inch 4,096 color display (640×200) and large keyboard. There is no touch screen so input is completed via the keyboard, direct to program hotkeys and a multi-directional shuttle key. Now at 12mm “center-to-center” key spacing, I found typing to be a little awkward. Given the choice, I prefer either a full sized (ie Think Outside) type fold up keyboard or the convience of a Blackberry style thumb board. Going for the middle ground here just made for more type-o’s.

Unlike other PDA products in North America, the 9290 runs the more UK standard Symbian operating system. This was my first time using Symbian so I did not quite know what to expect, although it turned out to be a very pleasant surprise. Symbian is very intuitive and stable and it took me about 10 minutes to figure my way around and set up my e-mail. It supports IMAP4, POP3, MIME1 and 2, MHTML, and SMTP so compatibility is no issue. Loading additional software titles was a refreshing experience. Once I installed the software, adding pictures, MP3’s, Excel sheets and other files was as easy as drag and drop. The files are converted on the fly so there’s no hassle for formats. As this suggests, the Symbian software included, spreadsheet, presentation, word processing and other standard office fare along with video and MP3 options. Synchronization with Outlook was a snap. The software also comes with both WAP and HTML web browsers (with frames & SSL) so all the bases are pretty much covered.

Conclusion: As a combo phone and PDA, the 9290 is an excellent indication of the progress being made. Just like the advertising suggests, you could actually use this as a laptop replacement for many basic functions like e-mail and office tasks. The use of GSM, non-upgradeability to GPRS and the overall heft of the device though, would not make it one I would want to carry everywhere I go. As such, I recommend the device to hardcore road warriors.