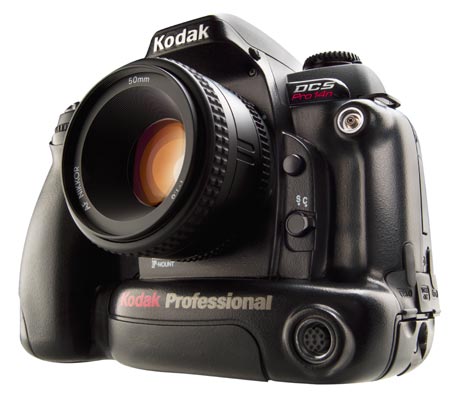 The easy-to-use DCS Pro 14n is Kodak’s sixth-generation professional digital camera and is primarily designed for professional portrait, wedding, event and commercial photographers, but will likely be popular with advanced amateurs as well. Built on a Nikon lens mount, it adds speed, as well as quality, to the photographers’ workflow through FireWire connectivity at a 12 MB per second transfer rate, nearly four times faster than previous Kodak Professional cameras.
“This is the camera that portrait, wedding and event photographers have been waiting for,” said Jay Kelbley, DCS Product Manager, Kodak Professional. “In addition to its highly competitive price point and phenomenal 13.89 million total pixels, the DCS Pro 14n is loaded with features and, thanks to Kodak Professional firmware, its overall image path enhancements make it the most upgradeable camera on the market.”

The camera is equipped with a 4536 x 3024 pixel (effective), 12-bit CMOS imager, covering the full 24mm by 36mm image area of 35mm film, allowing photographers to regain the benefits of true wide-angle lenses and use their Nikon SLR lenses as they have used them with 35mm film. With the DCS Pro 14n photographers have the freedom to select the image size (full 14MP, 6MP, and 3MP) that suits the shooting environment.

The camera captures images at about two frames per second. Images can be saved as DCR raw files or Kodak Professional Extended Range Imaging (ERI) JPEG files. Kodak ERI-JPEG files serve as another form of picture protection for photographers, especially in situations where re-shooting is inconvenient. Kodak ERI-JPEGs are created by and stored in-camera on removable media for later color correction or manipulation, and provide two-stops of exposure latitude and extended color space within a JPEG workflow, a benefit no other competitor offers. The ERI-JPEG format provides professional photographers ease-of-use of JPEG files with the image quality and color/exposure control of Kodak’s highly regarded DCR format raw camera files, to create the best quality images.

Images are stored in a CompactFlash memory card and a MMC memory card interface. Thecamera can write to both storage media, and the image can be sent to each card simultaneously in any of the available formats.

The Kodak Professional DCS Pro 14n Digital Camera is leveraged from a Nikon lens mount and the magnesium body is more durable and robust than plastic digital cameras based on similar camera platforms. The DCS Pro 14n uses cast magnesium encasements for a solid, rugged camera body instead of the plastic encasements commonly used by other manufacturers. The robust body includes a vertical trigger that works in conjunction with the camera’s auto orientation sensor. The sensor detects the camera’s orientation +/- 90 degrees from the horizontal position. This enables automatic rotation of the image as it moves to a computer for manipulation, saving photographers time and improving workflow, hallmarks of Kodak Professional’s efforts to make digital easier for customers.

Heeding photographers’ calls to simplify the transition to digital photography, the DCS Pro 14n includes features for new and more advanced digital shooters. The camera operates in two user modes: basic and advanced. The camera defaults to the basic setting and offers a very intuitive, simple interface. In the advanced mode, the user can adjust many more capture, resolution and storage settings, among others.

“The digital camera learning curve has been sharply reduced with the DCS Pro 14n. Novices and advanced users will be equally at home with the camera’s user-friendly functionality,” said Kelbley. “As Kodak continues to lead the industry in digital capture, we design our cameras to grow with the photographer. Whether it’s a beginner or experienced digital photographer ready to move up to a pro series camera, the DCS Pro 14n will help users explore new territory and upgrade along the way.”

The camera is capable of capturing images at two frames per second, for a full burst of up to eight frames in full-resolution mode. Because the features of the DCS Pro 14n are based on Kodak Professional firmware and not hard-wired within the camera, the camera can be enhanced and easily upgraded with free firmware downloads from Kodak Professional. Free firmware upgrades essentially give photographers a “new” camera whereas other manufacturers require the purchase of an entirely new camera system to receive the latest enhancements. Unlike competitors’ cameras, the DCS Pro DCS 14n can be taken to Kodak Service Qualified Sites to enable a deeper burst depth (from 8 frames to 18) by doubling the camera’s built in RAM buffer from 256MB to 512MB image memory.

The DCS Pro 14n has the first professional camera interface localized in eight languages. It includes the latest versions of Kodak Professional DCS Photo Desk and Camera Manager software, and supports DCR FFM and Kodak Professional ERI-JPEG format and is compatible with Kodak ProShots Studio Software Suite, an online image management and display tool that links the photographer to both client and lab in an effective digital workflow for film-based anddigital camera images.

The camera is digital camera format (DCF) compatible, a first for a Kodak Professional digital camera. The standardized DCF format gives photographers more access to printing services because most printing systems are calibrated to work with DCF files.

The camera includes a power source in the form of a single rechargeable Li-Ion battery pack, or by an accessory AC adapter. Photographers may select NTSC or PAL video formats for image review. In NTSC mode, the color LCD and the video output are enabled simultaneously, a feature particularly useful for portrait photographers preparing set-ups. Using a video monitor, photographers can “play back” images captured during a shoot as a preview and potential sales opportunity with customers.