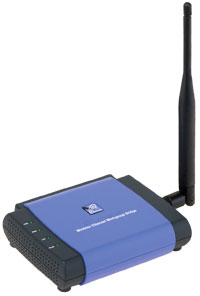 By linking Ethernet devices to 802.11b wireless devices, the Wireless Ethernet Bridge opens up channels to new data sources. Home networks and entertainment devices can swap and store music, games, and video files without wires and share a networked high-speed cable or DSL Internet connection. Entertainment devices such as the Microsoft Xbox™, Replay TV™, and the Turtle Beach™ AudioTron™ digital music player can also connect to a network with the Wireless Ethernet Bridge via their built-in Ethernet ports. Once the Bridge’s fast, driver-free setup is performed, it can be attached instantly to these Ethernet devices and numerous others anytime, anywhere with no reconfiguration.

Corporate IT can save money and manpower by using the Wireless Ethernet Bridge in a versatile range of applications. The Bridge quickly substitutes as a wireless adapter for any PC, Mac, or Linux box with a disrupted wireless connection. It can also be used interchangeably with various Ethernet devices like hard drives and routers for temporary wireless setups. Corporate offices and public access areas may offer the Bridge to mobile workers, business visitors and show attendees as a convenient, driver-free adapter for wireless Internet access. When attached to a hub or switch, the Wireless Ethernet Bridge can even simultaneously link entire corporate workgroups of up to 30 wired clients to 802.11b wireless networks.

Linksys Director of Marketing Mike Wagner said, “For the first time ever, devices with an Ethernet port can be hooked up to your wireless network. Be it a cash register, PlayStation® 2, or process control system, all of these Ethernet devices can now participate in the wireless networking revolution.”

The Wi-Fi certified Wireless Ethernet Bridge sends data at speeds up to 11Mbps with 64- and 128-bit WEP encryption features for wireless network security and includes an automatic data fallback mechanism to preserve data integrity. It performs peer to peer wireless networking in ad hoc mode, or operates with wireless access points in infrastructure mode, allowing wired resources to be accessed and extending the capabilities of the wireless network.

Other products in the Instant Wireless Series include 802.11a and 802.11b wireless PC and PCI cards, USB adapters, access points, routers, print servers and broadband residential gateways, and dual-band products.