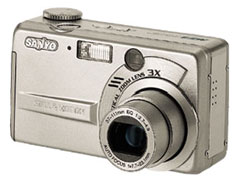 It’s your best friend’s wedding and you want to record the event in both still images and video. In a situation like this, Sanyo Electric’s latest digital still camera, which also offers a high-quality video recording function, can let you stop carrying around a digital still camera in your right hand and a video recorder in your left, the company announced Wednesday.

The Osaka company was one of the first digital still camera makers to add a video function to its product in 1998. By focusing on its video recording function, the company has been trying to differentiate its digital still cameras from other competitors’ products, says Masaya Tomabechi, a Sanyo spokesperson.

The new DSC-MZ3 features high-quality video images, allowing for video recording at VGA quality and 30 frames per second. This means that the recorded video can be replayed on a television screen without downgrading its quality, according to a Sanyo statement.

The 2-megapixel digital still camera function features a start-up time of 1.7 seconds and a recovery time between taking still images of 0.8 second in normal mode.

The product is equipped with a fixed 3X optical zoom lens and an 1.5-inch polysilicon thin film transistor color LCD, measures 3.9 inches by 2.2 inches by 1.3 inches and weighs 7.5 ounces.

The camera’s recording media is either a Compact Flash card or a microdrive. A 1GB microdrive can record up to 10,950 still images or 191 minutes of video.

Sanyo is planning to roll out the DSC-MZ3 on September 20 at $489 in Japan. In the first month, 15,000 units are expected to be manufactured. The company plans to roll out the product overseas soon after its Japan launch, Tomabechi says.