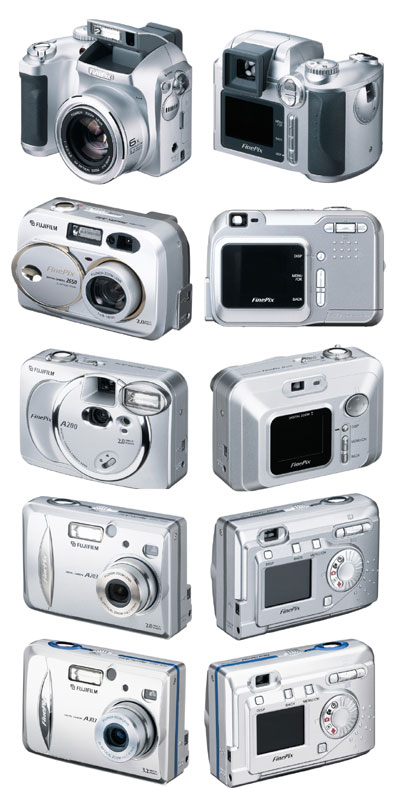 Meeting the needs of today’s digital photographers, Fuji Photo Film U.S.A., Inc., unveils five Finepix digital cameras, all using the new ultra-compact, high-capacity xD-Picture Card. The new cameras — the user-friendly FinePix A200 and FinePix 2650, the sleek FinePix A203 and FinePix A303 and the powerful FinePix 3800 – and the new memory card will all be available at retail this September.

Going Digital for the First Time
The FinePix A200 and FinePix 2650 are perfect for the first-time digital picture-taker seeking an easy-to-use camera that has a similar look and feel to a traditional film camera with the added advantage of digital features. As 2.0 million effective pixel cameras, both allow for the development of crisp and colorful pictures up to 8 x 10 inches in size. In addition, the inclusion of a 3x optical zoom (available in the FinePix 2650 only), low power consumption through the use of two AA Alkaline batteries, movie recording and video conferencing capabilities make these cameras an excellent value at a price of $179.95 and $249.99 respectively.

Shoot Like a Pro
Building on the success of the popular FinePix 2800 Zoom, Fujifilm offers advanced features and controls in addition to point-and-shoot convenience with the new FinePix 3800. At a suggested retail price of $449.99, this 3.24 million effective pixel camera offers a variety of higher-end photographic features including a manual mode with aperture control and exposure compensation, a 6x optical zoom and support for lens adaptors. This added flexibility provides the shooter a variety of picture-taking options, thus enhancing the overall digital photography experience.

xD-Picture Card – High Capacity in a Small Package
Jointly developed by Fuji Photo Film Co., Ltd. and Olympus Optical Co., Ltd., the new xD-Picture Card is the smallest storage format of its kind on the market – comparable in size to a penny, measuring just 0.79″ x 0.98″ x 0.07″ and weighing less than one-tenth of an ounce – with the potential for up to 8GB storage capacity in a single card. This unprecedented combination of small size and large capacity will allow Fujifilm and other companies to manufacture sleeker and lighter cameras than ever before.

In addition, the xD-Picture Card was designed with fast read/write capabilities for smooth digital camera operations. A 16 or 32MB card can record data at 1.3MB/second. A 64MB card or higher can record data at 3MB/second and both offer a read speed of 5MB/second. The card was also designed to minimize power consumption, saving battery life.

PCMCIA and CompactFlash card adapters will be available, allowing use of xD-Picture Card in a variety of cameras and other devices.