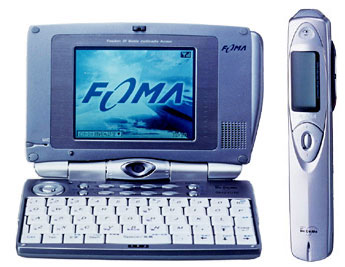 NTT DoCoMo, Inc. announced today that it will market a new 3G Foma -compatible two-part terminal – a PDA base unit with a BluetoothTM wireless handset.

The FOMA SH2101V base unit has a built-in camera that enables 64kbps real-time videoconferencing – while the wireless handset is used for voice communication. The handset can also be used, via the PDA, as a simple voice phone or for checking e-mail (even when the PDA is folded away), or as a remote control when playing downloaded music on the PDA.

The PDA base unit and handset connect using Bluetooth, a world standard for wireless communication between mobile phones, PCs, and other devices.

The FOMA SH2101V has a 3.5-inch, 262,144-color TFT LCD touch-panel screen and a keyboard. It is compatible with a number of DoCoMo’s packet-based mobile multimedia services including, i-Mode, i-motionTM, and ippliTM, with a maximum download speed of 384kpbs. It can send and receive e-mails of up to 10,000 alphanumeric characters via i-mode, and also supports M-stage visual, a video content distribution service that enables users to download or stream movies, news, sports, music, and so on via 64kbps circuit-switched wireless transmission.

The new terminal will be marketed through all DoCoMo sales channels from July 16, 2002. The retail price is open (not fixed). The standard accessory kit, including a wireless handset, battery packs (for both PDA and wireless handset), AC adaptor and cord, touch panel stylus, and FOMA-card cover, will cost 46,600 yen.