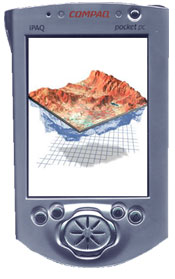 SGI and Nokia have signed an agreement to cooperate on the development of a 3D standard suitable for all embedded mobile terminals, based on OpenGL®, a vendor-neutral, multiplatform graphics standard. Mobile phones, PDAs and other mobile devices are about to be transformed by the addition of 3D graphics, which will greatly enhance the marketability of content services to consumers. The possibilities of these mobile terminals will be virtually unlimited, ranging from top-selling interactive games, to video clips synchronized with text, to 3D global positioning systems (GPS), and 3D representations of buildings and terrains.

Introduced by SGI in 1992, OpenGL marks its 10th anniversary as the industry’s most widely used and supported 3D and 2D graphics application programming interface (API). The creation of open industry standards in the exploding marketplace of embedded mobile devices benefits everyone from software developers to consumers, since open standards ensure compatibility between hardware vendors.

The agreement between SGI and Nokia ties into an embedded devices standard that is being developed by the Khronos Group, a consortium of digital media and graphics industry leaders. The Khronos Group is involved in developing and marketing a variety of media and graphics standards for nonmobile devices including game terminals, set-top boxes and avionics. SGI and Nokia’s agreement will enhance Khronos’ embedded needs overall and extend the value for developers who write to OpenGL and want their applications to run across products from cell phones to supercomputers.

“This agreement leverages SGI’s 20 years of graphics innovation and leadership alongside Nokia’s expertise in mobile applications. Together, our companies are the catalyst and focal point for providing the world with an embedded subset based on OpenGL, the most widely used graphics standard in the world,” said Shawn Underwood, director of marketing, SGI.

“The time to define open standards for mobile 3D graphics has arrived; the time is now,” said Kari Pulli, senior research manager, Nokia. “We support Khronos’ work in OpenGL. We are also leading Java Mobile 3D Graphics API standardization, and it is critical at this juncture to avoid the two approaches becoming incompatible. We look forward to working with SGI and to developing open standards that will benefit everyone.”

SGI celebrates 20 years of graphics innovation and leadership and the 10th anniversary of OpenGL at SIGGRAPH 2002, July 23-25 in San Antonio, Texas, with new version enhancements and demonstrations in the SGI booth #13063.