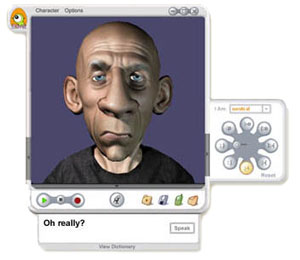 Taking text based messaging to an entirely new level, 3dMe launched 3dMe MessengerTM, a unique character based messaging platform where users literally put their words in the mouths of an array of 3-D animated characters, which speak the words and send them across the Internet. This product represents the first look at the innovative technology created by 3dMe, the content, software and consumer communications company, which provides premium character based multimedia messaging for PC’s and mobile phones.

3dMe Messenger provides an easy-to-use and entertaining interface that allows people to select a 3-D character, animate its expressions and record or key in the messages that the character will speak to the recipient of the message. In seconds, the user can create and send the complete message to friends or associates via an email or an Instant Message attachment on their PCs. One unique feature is the Mood Wheel, in which the user can select and control a character’s facial expressions and moods, ranging from excited or silly to sad or bored.

Speech and lip synchronization is created from either text to speech functionality or from real time voice recognition making believable communication possible across multiple languages. 3dMe is introducing several character personalities including Shmenk, Floyd, Leona and Albert for people to use in communicating messages. The company will create, license and release new characters every month “3dMe Messenger is the next innovation in Internet communications,” says Todd Griffith, President and CEO of 3dMe. “The market has seen the increasing power of email, chat, Instant Messaging on the PC and SMS text messaging on mobile phones. 3dMe provides an entirely new level of Internet and mobile phone communications based around expressive characters exhibiting real life human moods and speech.”

The 3dMe service is initially targeting heavy Internet communicators including power users of email, Instant Messaging, Chat and games, and will also unveil cross platform initiatives to appeal to WAP, SMS, MMS and picture messaging users. The 3dMe Messenger platform is available on a free trial basis from www.3dMe.com and on June 28th from www.download.com. The annual subscription price for the platform, all upgrades and a new character-a-month is available at the introductory price of $9.95.