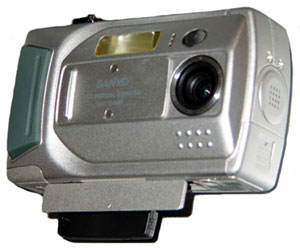 Sanyo Electric Co., Ltd. announced on July 4 that it has developed a digital camera that complies with the IEEE802.11b wireless LAN specification.

The company demonstrated the digital camera at the “NetWorld+Interop 2002 Tokyo,” show held at Makuhari Messe in Chiba till July 5. (Photo) The still photos and the moving images taken by this camera can be automatically sent to the server on the IP network via the base station for wireless LAN access service.

The demonstration camera uses a Compact Flash-type wireless LAN card, and has a hand-over function to go between base stations, and an authentication and encryption function to comply with “Genuine,” a wireless LAN access service from Mobile Internet Services Inc. (MIS). Because of the processing capability of this camera, the wireless data transmission speed is limited to about 1Mbps at the moment.

Unlike the existing digital cameras, with which users need to transfer images to their PCs on their own, the camera with wireless LAN function enables users to send the photos directly to their personal Web site or to order photo development on the Internet directly from the camera, for example. Sanyo Electric also hopes to target business use, which proposes a construction site, for example, to send photos of the progress of the work from the actual site. The company, however, has not decided when to commercialize this type of product, but plans to see the market trend and discuss the possibilities.