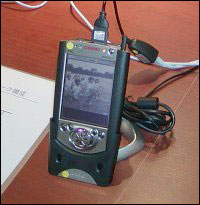 The Networld+Interop 2002 Tokyo held July 3-5 at the Makuhari Messe exhibition center and 34 of the participating firms have banded together to set up a display called the “IPv6 ShowCase” to promote Internet Protocol version 6 (IPv6) products.

In particular, personal digital assistants (PDAs) equipped with Mobile IPv6 (IPv6 with some added features for mobile devices) have been attracting a lot of attention from visitors to the expo.

The special feature of Mobile IPv6 is that, just as mobile phone users can go on talking while signals to and from phones are passed over from one antenna base station to another, it allows users to move freely between networks of different IP addresses without interrupting the current session.

Hewlett-Packard Japan Ltd. is showing a prototype “iPAQ” PDA equipped with Mobile IPv6 (see photo, left) and demonstrating it playing streamed video data while it moves between networks with different addresses. The company says that the final commercial product will run on Windows CE, but the model being used for the demo is a specially prepared device running on Linux.

Several other companies at the expo including NEC Corp., Sharp Corp., and Hitachi Ltd. also are exhibiting IPv6 and Mobile IP-equipped laptops and PDAs, and all are using the Linux operating system. It therefore appears that Linux and UNIX are ahead when it comes to developing products that incorporate IPv6.

Matsushita is displaying a microwave oven and a refrigerator with the idea being that if the oven and fridge communicate with each other then it will be possible, for example, for the oven to find out what the temperature has been inside the fridge’s freezer compartment before starting to defrost food. This will allow the defrosting process to be performed better than with conventional ovens which rely on measuring the surface temperature of frozen foodstuffs. Therefore, says Matsushita, equipping home appliances with communications protocols has merits for consumers.

One of the clear advantages of IPv6, when compared with IPv4, is that it has capacity for many more addresses, allowing a wide variety of different devices to be allocated their own global IP addresses. A second advantage is that it enables all those devices to access the Internet without having to worry about complicated network settings.

Both of those merits are being exploited by Sony Corp., which is showcasing how the PlayStation2 (PS2) game console can be used with IPv6. Sony and one of its subsidiaries, Sony Broadband Solutions Corp., ran a trial PS2-IPv6 service in February and March that featured video downloads and communication between consoles over the Internet. The results of that successful trial are on show at N+I 2002. The PS2 is able to access the network automatically as soon as its power is switched on, and users can benefit from user-friendly peer-to-peer applications such as online chat rooms.