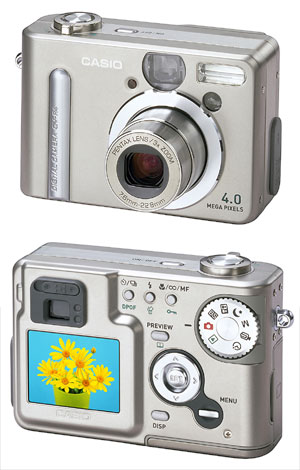 Casio Computer Co., Ltd. unveiled on June 24 a new digital camera, the “QV-R4,” which cuts the so-called “release time lag,” the time between a user pushes the shutter button and the picture is actually taken, to 0.01 second.

The new camera comes with and effective 4 mega-pixels and 3x optical zoom lens. It is a product designed especially for photographing fast-moving photo objects such as people playing sports and children. The price is open. The expected retail price is around $499 USD. The new product will be released in late July.

QV-R4 separates the shutter control system from CCD, and incorporates it into an independent LSI, thereby achieving a release time lag of 0.01 second. The company used the same technology for 1.3-mega-pixel digital camera “EXILIM,” which was released this month.

The main specifications are as follows: the imaging element is 1/1.8 type CCD. The lens focus range is 37.5mm to 112.5mm in 35mm film equivalent. The lens F value is 2.6 (wide angle side) to 4.8 (telescopic side). The recording media can be either SD memory card or multimedia card. The LCD display is 1.6-in TFT.

Power is provided by the special lithium battery cell. The outer dimensions are 90mm in width by 31mm in depth by 59mm in height, and it weighs about 200g (the camera only).