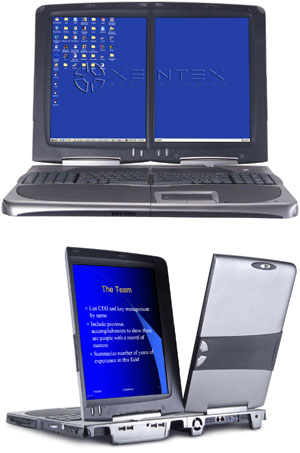 Xentex Technologies has announced the availability of it’s premier product, the Voyager. The Voyager, the first product to incorporate Xentex’s patented and revolutionary Flip-Pad™ architecture, is a potential replacement for both laptops and desktop computers, simplifying the lives of many computer users.

Xentex founder Jeff Batio said, “The Voyager displays our commitment to the user, by providing a computer that meets our customers’ technical needs in a package that is actually enjoyable to use.” This environment utilizes the Flip-Pad architecture to deliver a larger display and keyboard than found on any laptop, with more work area than all but a handful of desktops. According to Batio, the Flip-Pad architecture can be used to combine the comfort level of a high-end desktop with the portability of a laptop, “offering a replacement for traditional types of computers, not just adding another device to already overloaded technology workers. Flip-Pads will replace both laptops and desktops.”

Another key feature of the Flip-Pad product line, represented here by the Voyager, is the increase in communication and productivity. With a revolutionary swiveling screen the Xentex Voyager enables what Xentex is calling XPC™, or the extrapersonal computer.

“XPC is really about allowing multiple users to interact with the same computer, whether that includes a presenter viewing notes while displaying slides, or two or more individuals using their own dedicated display, keyboard, and mouse to collaborate on a common application, or even to use entirely separate programs,” said Xentex Product Development Director Matthew Vanderzee.