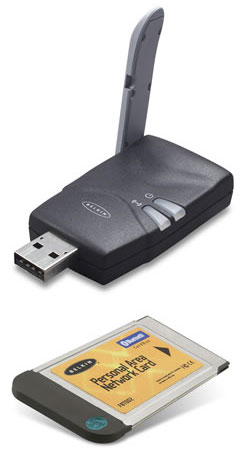 Belkin, the leading manufacturer of computer peripherals, accessories, and networking products, today introduced its Bluetooth Universal Serial Bus (USB) Adapter (F8T001 – ESP $69.99), Bluetooth PC Card (F8T002 – ESP $79.99), and Bluetooth Personal Digital Assistant (PDA) Adapter Card (F8T020 – ESP $79.99), which are the first in a line of Bluetooth solutions scheduled to be released this year by Belkin. All three are compatible with Bluetooth v1.1-certified devices and are set to start shipping in North America on July 1, 2002.

All Bluetooth products from Belkin have the ability to exchange data at speeds up to 721Kbps and allow ad-hoc networking, which gives the user the ability to communicate and exchange data without having to configure a network. Bluetooth technology from Belkin offers the user built-in security, using up to 128-bit encryption and authentication. And, with the ability to connect up to seven devices enabled with Bluetooth technology simultaneously, users can effortlessly transfer data to and from other Bluetooth devices-such as desktop or notebook computers, input devices, PDAs, scanners, printers, and even mobile phones-wirelessly.

The Bluetooth USB Adapter from Belkin, which adds Bluetooth technology to an existing USB PC or notebook computer, allows users to wirelessly print, sync their PDA information, and use their cell phone to access the Internet. It installs easily with Plug-and-Play convenience and offers distances of up to 100 meters with 0 to 20 dBm output power. It also comes with a 5-foot USB extension cable for convenient access to the user’s USB port and is compatible with Windows® 98 SE, Me, 2000, and XP.

Lastly, the Bluetooth PDA Adapter Card adds wireless technology to the user’s PDA, eliminating the necessity for cable connections. Truly easy to use and simple to install, the Adapter Card slides into an available CompactFlash™ (CF) Type II slot on a Pocket PC and creates an instant connection with other Bluetooth devices, offering the freedom and flexibility of wireless information sharing such as exchanging e-mail, browsing the Internet, or printing. With Bluetooth technology, users can synchronize their PDA on the fly without having to purchase and carry a sync cable. The Bluetooth PDA Adapter Card allows users to work at distances of up to 10 meters and offers low-power consumption, allowing PDA batteries to run longer.