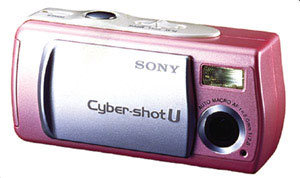 The camera allows users to take pictures of, for example, a blackboard or a bulletin board, just like making notes. The price of the camera is open, but the estimated sticker price is around 25,000 yen. Sony Marketing has realized the low price by adopting a 1.3-million-pixel CCD and a single lens. The new camera will be launched on July 20.

The product is available in three colors: silver, pink and blue. The camera will be turned ON when its lens cover on the front surface of the main body opens. Users can take pictures about one second after the camera is turned on. By using AA nickel metal-hydride batteries, the camera enables users to take 1,800 pictures continuously (for 70 minutes).

Major specifications of the Cyber-shot DSC-U10 are as follows. It has a 1/2.7-inch progressive-scan CCD. The focal length of the lens is about 33mm when converted to a 35mm film camera. The F value is 2.8. The shortest filming distance is 10cm and the longest, infinity. It can record images in 1,280 x 960 dots or 640 x 480 dots. It can also record moving images continuously for up to 15 seconds at the resolution of 160 x 112 dots. The camera is equipped with a 1.0-inch TFT -LCD. The recording medium is a Memory Stick. Its power supply is two AA nickel metal-hydride batteries. It measures 84.5mm in width, 28.6mm in depth and 39.8mm in height, and its main body weighs about 87g.