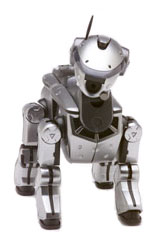 ¡§With the super core inside providing a faster CPU, the new 200 series will be able to more quickly respond to and process cues from its environment,¡¨ said Victor Matsuda, ERA¡¦s vice president. ¡§We¡¦re excited about the software possibilities that can be created by this development, which will surely expand the applications for this entertainment platform in the near future.¡¨

Both of the new AIBO robots will feature a significant increase in clock speed to 384MHz, doubling the previous speed of 192MHz. To support the increase in applications for the new robots, a 16MB Memory Stick„µ [ERA-M06] is also going to be made available for about $39.

The introduction of the new super core-enhanced robots follows ERA¡¦s recent announcement of the new OPEN-R SDK, a software development tool set aimed at academic institutions and programming enthusiasts who want to create new functionality for the AIBO platform.