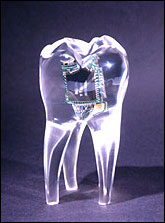 British engineers say they have invented a revolutionary tooth implant that works like a mobile phone and would not be out of place in a James Bond spy movie.

The implant does not yet have its own microchip installed, but Auger says the technology is tried and tested, and a fully functional phone could be put together in no time at all.

“With the current size of microchips this is feasible. They are now small enough to implant in the tooth,” he told Reuters Tuesday.

Sound, which comes into the tooth as a digital radio signal, is transferred to the inner ear by bone resonance, meaning information can be received anywhere and at any time — and nobody else can listen in.

The invention raises the prospects of financial traders receiving the latest stock market bulletins while at the cinema and politicians tuning in to secret briefings from advisers while being quizzed by opponents.

Despite its similarity to high tech gadgets dreamt up by Bond’s faithful sidekick ‘Q’, the inventors believe the gizmo could become the first in a whole suite of non-medical devices implanted into the human body.